Prior to its most recent redesign (2011), Wired used a set of specially commissioned typefaces from Hoefler & Frere-Jones. Two of those typefaces, slab serif Vitesse and it’s sans serif counterpart Forza, still appear in the magazine’s nameplate.

For the majority of the type within each issue, Wired has adopted the serif Periodico and sans serif Calibre as its primary typefaces. At the most basic level, Wired uses Periodico for body copy and Calibre for most display copy, as well as body copy for some sidebars. This seems to be the common practice for a lot of publications. (Side note: Most of my example images are screenshots I’ve taken from the tablet edition, but the comments generally hold up for both print and tablet.) 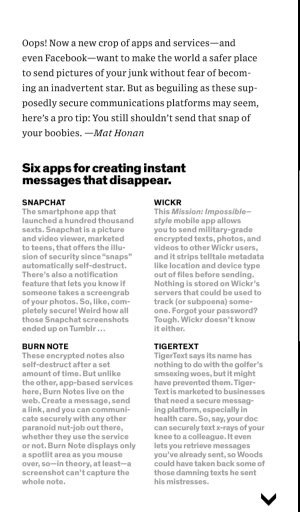 Most headlines use a heavier weight of Calibre, while subheads use a lighter weight and are a smaller size. Sometimes color is used to add the element of contrast/emphasis. 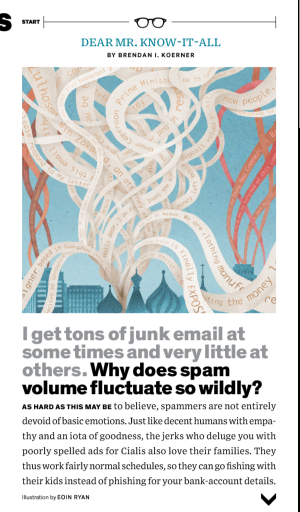 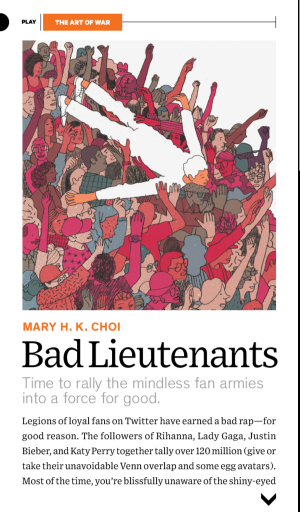 The Play department is an exception to the sans serif hed and dek style. While the dek is still a light weight of Calibre for stories in Play, Periodico is used for heds. This is likely done as a means of setting Play apart from the other FOB departments. Play differs from other departments in that it has a different theme each month (displayed in reverse type in a colored box in the folio). It’s a very subtle way to visually separate Play — I honestly never noticed it until I went looking for things to write about in this assignment.

Other observations: Things like bylines, smaller headers and display type in general aside from the main hed/dek are usually all caps, perhaps to create a balance of styles on the page. The first few words of a story’s lede are also often styled in all-caps bold Calibre to set it apart, though by making it slightly smaller than the body copy, they prevent it from becoming too distracting. This seems like it would be a fairly consistent style throughout the magazine, but I actually have not figured out what rules dictate when this style is or is not used. On occasion stories even begin with all-caps serif instead of sans serif. However, I can’t determine a specific type of story tied to the use of this style — it appears on and off through the FOB and the features well. 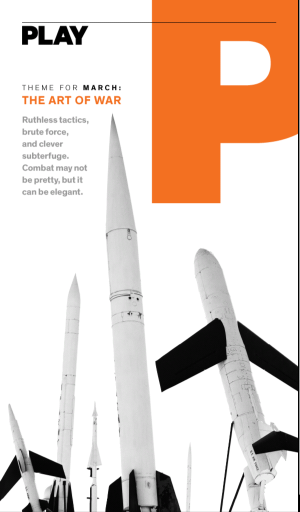 Typography plays into the styling of the departments, as well. The front page of each FOB department (Start, Test, Play) prominently features the first letter of each department name. The letter also plays into the folio throughout the section. Wired tends to stick to Calibre for the big, bold letters like these and drop caps, and doing so does create a very particular impact. 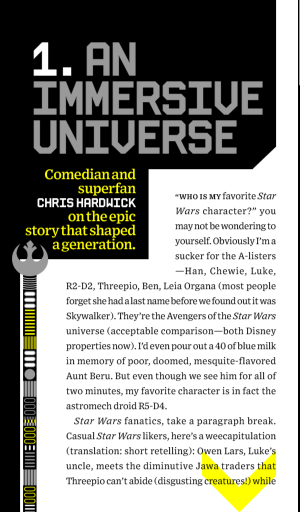 Features have more flexibility and sometimes get a slightly different typographic treatment.

For features, Wired may stray from its standard typefaces and bring something different into the mix for display type, as seen above with the narrower, more angular display type in the Star Wars feature. It’s a typeface that’s appropriate to the story. Color also becomes especially important in features treatments.

Overall, Wired‘s use of type is very clean, though there are the occasional stylistic inconsistencies. The frequent use of a bold sans serif feels almost like a stamp on the publication and gives the pages some weight.