For the most part, the colors in Wired vary from issue to issue.  This is most obvious on the cover, where colors are constantly changing, including on the nameplate.  The colors on the cover typically compliment the dominant graphic.  I’ll give you an example: 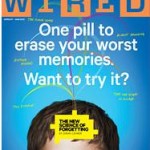 This is the cover of the latest issue of Wired.  The blue is used to provide a backdrop for the mans head (which is the dominant graphic).  Also, the nameplate is orange in order to supposedly compliment the blue.  However, I don’t necessarily like this cover because I feel that the blue, orange, and yellow really do not mix well together.  I just find it very distracting to the eye and doesn’t really seem to convey a particularly strong message. 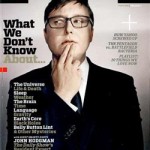 This cover, however, is done very well in my opinion.  There is not much color going on, but the gray, black, and tan compliment each other and the dominant graphic very well.  Also, the lack of bright colors give the cover a sense of mystery in a sense, and I think that fits nicely with the headline “What we don’t know about…”.  Overall, very well put together.

As for inside the magazine, the colors also seem to vary when it comes to headlines on feature articles.  However, for the most part, standard headlines and body copy are typically black.  I think this is a good thing, as there are so many other colors everywhere else that colors in the text would almost become too distracting.

I do think they use color very well to establish hierarchy.  Let’s take a look at an example: 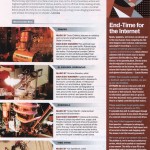 As you can see, most of the body text is a standard black.  But color in relation to hierarchy comes into play when they use the steel blue/grey to highlight the beginning of each section and then use maroon to further break down each section.  This gives the reader a better way to break down the body copy and also notifies them as to what parts are the most important.  Overall, there isn’t too much color, but the color that is used compliments the pictures very well and leaves the page looking crisp and clean.  They colors are also very mechanical looking, which I think was purposeful because the page is talking about robotics.  There was definitely intention.

As shown by the previous image, I think colors (though they vary greatly from issue to issue) are used primarily to compliment the subject of each page/section.  I have seen pages with very bright colors and pages with very subdued colors, and each are used in relation to the material being presented.  The colors bring to the table a reinforcement of the subject matter.  It does not necessarily carry its own meaning, rather it simply compliments the meaning being presented in the pictures and text.