FORMAT: Fast Company is a monthly print and digital business magazine which according to its website, focuses primarily on technology, leadership, innovation and design. Fast Co. as it’s often referred to, published 8 issues a year and is based in New York City. Their Editor-in-Chief, Stephanie Mehta has been with the magazine since February 2018. Their page size dimensions are 8 1 /4” × 10 3/8” and maintain gutter sizing of 1/4” on each side of gutter, 1/2” total gutter safety for spreads. The magazine has 103 pages including the front and back covers. I wasn’t able to find the dimensions for the margins

CLEAN, SIMPLE, AND PRECISE: Those are the words that come to mind after looking at how Fast Company takes advantage of their white space in their May 2019 issue, entitled “The 100 Most Creative People In Business.” Fast Company loves white space, and isn’t afraid to use it. Though they are a text-heavy magazine, they utilize full-bleed images and full-page images on many of their spreads. Fast Company utilizes straight lines and an almost robot-like precision on their pages. Most stories and spreads have at least one alternative story form whether it’s recommendations, a side-bar, or infographics.

such as the example below which shows Leslye Headland’s songs for different occasions. But I think the way they separate each little blurb put each song into a situation like “Commuting” or “Working Out” and insert a quote from Headland is affective in drawing the reader in and putting the list into context.

In Fast Company they’re careful not to overwhelm the reader with photographs and graphics. There’s hardly any pages that have more than two graphics or one photo. They use white space as separation between story formats and to give the reader space to breathe. When there’s a column on a page (which is quite often, they’re sure to put enough white space between the column and the main story, to show the audience that these are different features and to allow their eyes space to move from one piece of text to the next (see examples below). 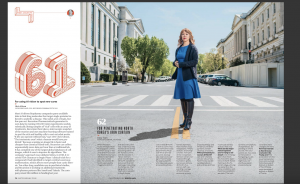 Fast Co. uses straight lines as a means to frame their content, and space outside of the lines to allow the reader to focus in on the editorial content. These lines, usually bolder vertical lines and thinner horizontal lines create borders around the stories and also allow the freedom to break up text on the page to give the audience’s eyes a break. Their text is always centered in some way on the page with large margins of white space on each side to focus the readers eyes on the middle of the page where the information lies. There isn’t any full-bleed text that I’ve seen. (see examples below) 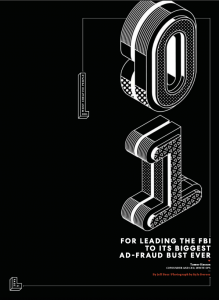 In this issue, they used “L” shape graphics and lines throughout the book. Because Fast Co.’s pages are filled with white space, perhaps also to give readers the chance to absorb all the information they can from their heavily-reported stories, they make use of smaller graphic elements as a means to engage the reader, but not take away from the main focus of the magazine: the words. (see examples below)

The straight lines used as borders and “L shaped” lines and graphics are also used to knit the pages together and keep a sense of uniformity throughout the book.

Overall Fast Company employs space, and especially white space in an extremely powerful way. Their stories are always clearly the focal point of each page, but the margins, of at least an inch or so give the reader time to absorb the information before moving onto the next graf. The straight lines and “L”shaped fixtures throughout the magazine create a precision and box affect that is exemplary for a tech/business/innovation magazine that prides itself in their expertise for emerging trends in those before mentioned fields. When they do put in photographs, they’re usually full-page or spreads to allow the reader to take in the full picture with no text in the way of the imagery.