Nameplate: Fast Company’s nameplate uses the typeface “Grifo.” It’s a serif typeface, albeit it does seem more rigid than other serif typefaces because of it neoclassical roots, the use of thick and thin lines to create contrast among the characters. But, Fast Company has made some alterations to the classic Grifo font, by the font’s creator himself, Rui Abreu, to liken the new-ish nameplate to Fast Company’s original logo. The Fast Company nameplate and logo include the smaller “A” in “Fast” and an “O” that  appears nestled within the “C” of “Company,” they kept this when they re-designed the magazine in 2018. According to creative director Mike Schnaidt, when they re-designed the magazine and the logo, they wanted to maintain some of the quirkiness and rock n roll of the original Fast Company (Alan Webber and Bill Taylor who originally launched Fast Company in 1995, their goal for the magazine was to marry the  Harvard Business Review‘s content with Rolling Stone‘s energy–hence a nameplate reminiscent of the bright, bold Rolling Stone.) This new nameplate and logo gives Fast Company a more grown up, professional look, with its tall characters and bold thick/thin contrast. But keeps their quirky edge with the small caps “A” and “O” and triangular serifs. 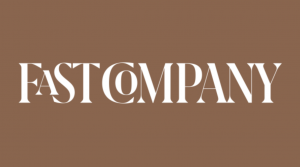 Typefaces & fonts: Fast Co. utilizes several different typefaces and font variations in their magazine. They use multiple sans serif fonts, presumably to get that clean-cut look that many tech/business magazines want to preserve. The sans serif font they use most often, more for heads and deks is Centra No. 1 from the Gils Sans typeface family. As stated by the Sharp Type website,“Centra No.1” is an interesting balance of humanist construction applied to a geometric framework. It contains double story “a” and “g” forms more reminiscent of the written word,” and indeed it does seem like Fast Co., who, in their re-design explainer said they’re trying to revert their journalism back to focus on people. So, it would make sense that they would choose this particular font that stays consistent with their clean, simple, look, but also appeals to the fact that they care about who they speak about in their magazine and who reads that content. 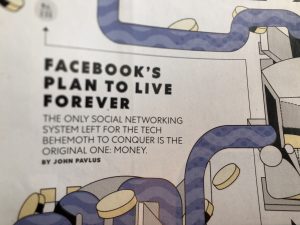 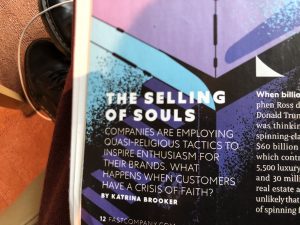 One of the two other sans serif fonts that creative director calls the “spices” of their typeface set, is A2 Beckett. This font is bold, with a capital “B.” This font doesn’t just ask to be noticed, it demands attention. A2 Beckett is their condensed sans serif font, and it is just that. With small, thick, block-like letters, and hard edges, on all of its edges. This font choice very much surprised me. Through researching Fast Co. these past few weeks, this font doesn’t seem to fit into their repertoire. They don’t have a condescending voice, or even an authoritative one. They’re all about informing and helping their readers better themselves and their practices be it with investing in start ups or learning which credit card can help them track their carbon footprint. Even looking through the October 2019 issue, which is the issue I’ve been referring to during this field note, I didn’t see a single example of this font being used. So, I’m guessing it’s a font they save for special occasions/when the story treatment calls for a bold, brash font like this one.

The second of their “spice” sans serif fonts, is the monospace font dubbed “Simple.” Simple is much more prevalent in Fast Co. than A2 Beckett. Through a quick google search I found out that a monospace font is a font in which all their characters are equal height and width, which my OCD went absolutely nuts for. A monospace font I think makes a lot of sense for Fast Co. each page in the magazine feels so well thought out and laid out to maximize an easy, and positive reading experience for the audience. They often utilize infographics and double page spreads with graphic design elements to introduce a subject or explain a concept their audience might not be up to date on. Simple is part of the LLineto typeface brand and Fast Co. utilizes it mostly for heds, pull-quotes, and sub-heads throughout their print book. Simple has a bit of robotic feel, perhaps just because it’s so straight-edge. As I was playing around with the font on lineto.com, i found that there are so many different variations of the font, which I’m sure isn’t a big surprise. But it was a little mind boggling to me to see how different the font looks when it’s stretched out, bolder, and slightly more condensed than what it is when it’s light, condensed and squatter. Through playing around on that website I realized that the tall, monochromatic looking font that they use for many cover lines seems to be a variation of Simple, as well. 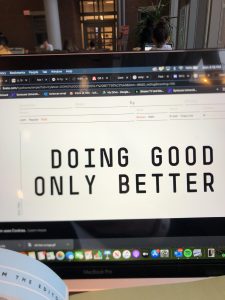 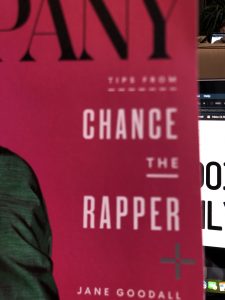 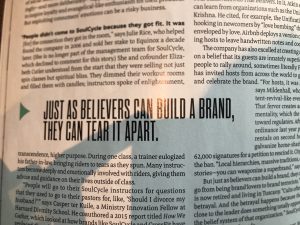