At the long weekend of Society of News Design Judging, I absolutely loved all of the esoteric conversation.

My favorite part of the weekend was hearing the judges debate the medal winners. I am a total dork for deep conversations, and design begets them. What makes good news design after all? Something deeply human and emotional. It’s beautiful.

I learned a lot about design in a short time. Some concepts reign supreme, yes: For example, less is almost always more. Deliberateness, thoughtfulness and critical thinking are such valuable assets for a designer to have, or to a design.

And when it comes down to it, design isn’t really all that subjective – and that is so cool. The judges generally were in a lot of agreement with one another. We didn’t uncover a lot of chips with 2-3 or 3-2 votes. Either the judges loved something or they didn’t (I still hear “0-5, 0-5, 0-5” echoing in my head). I was also really thrilled to see that I was on board with the judges too! Of course, there were wonderfully designed and gorgeous pages being strewn aside, but everything can’t win, and I really thought many of their decisions made so much sense.

When it came down to the final conversation about best in show, I was on the edge of my seat. Both of the final pieces were excellent – and represented two sides of the best of news design. On one hand, the Norway paper’s coverage was classic reporting and news at its finest. I didn’t get a chance to examine those pages for very long, but what they represented was the sheer power of communication. On the other hand, the Bloomberg News piece on Steve Jobs was magazine design, bare bones, simple, forward-thinking – another awesome representation of what words, images and paper have the power to do. As I passed by each one displayed on the long table, I got the chills. That’s what design can do.

I had so many great conversations with judges and professionals. It’s so hard to think of which examples to use, but I’ll pick my accidental lunch buddy. Colin Smith, who is now with Gannet, sat down to lunch with two of my classmates and me and chatted our ears right off. It was great! He was smart, friendly and encouraging.

It was really interesting to hear his thoughts on news design from the standpoint of someone who is moving from working in the newsroom to working for a satellite design house that will work away from the newsroom. This is really the near future of news design, or at least one company’s approach to it. Colin was very convincing that this approach had upsides in addition to downsides. Satellite design opens up a world of resources, expertise, and specialization, even if it opens up a risk for detachment from the story’s roots. By the end of our chat, I was confident good communication could save that from happening.

I learned that I could have what it takes to be a news designer – that coming from my background and experience is common, that many people were in my shoes and caught the design bug. Most of all, it was really clear that I don’t need to be a Photoshop nerd to be a design nerd. I also gained some confidence in myself, for sure, just from talking to professionals and being outgoing and helpful and friendly. I feel like I made a good impression on a lot of people – and that really made me feel good.

It was so encouraging to hear Colin talk about what he looks for in someone he’s hiring. It really drove the point home that design is conceptual and thoughtful, not just computer skills based. He made me think about what it takes in a team to create news design and he really made me want to apply for a job.

For all of these reasons, I am very strongly thinking about design’s future, in my future. And really – designers are such cool people! They love conceptualizing ideas. I couldn’t tell you what is better than that. Not to mention, they have style (or most of them do). 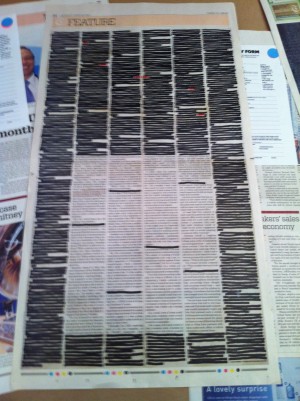 I love so much of what the Times of Oman is doing, but newspaper blackout simply isn't new. That doesn't mean it's bad! But check this out: http://www.brainpickings.org/index.php/2011/09/27/steal-like-an-artist-austin-kleon/ 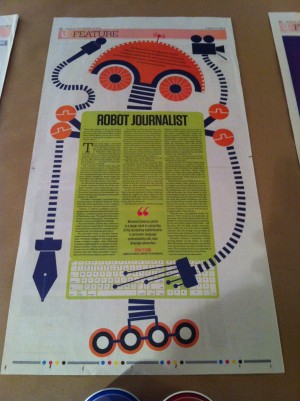 Being a journalist and all, I might be biased - but I loved this piece because I feel like the graphic fit the content so cleverly. And it really made me want to read this article because the design was just so appealing to the eye. 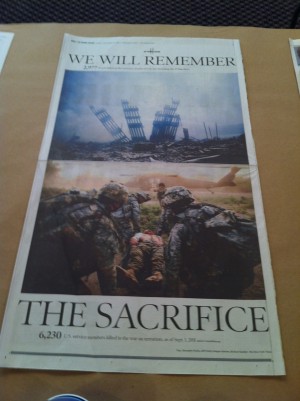 There were a ton of 9/11 designs in this year's contest, unsurprisingly, but I found this one really striking because of its use of the space for photography. The symmetry is so powerful and understated. The message is perfectly clear and suitable for the content. 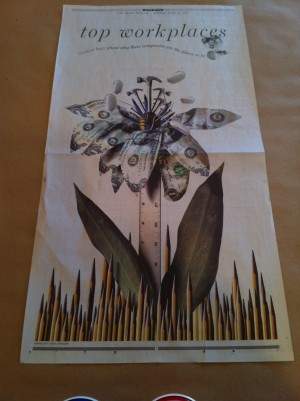 I was so impressed by illustrator Andrea Levy's work. The way that she mashes two ideas together by using materials and media to represent an idea is fundamental to news design - though for me, her work is art. I think it's so clever and meticulous. 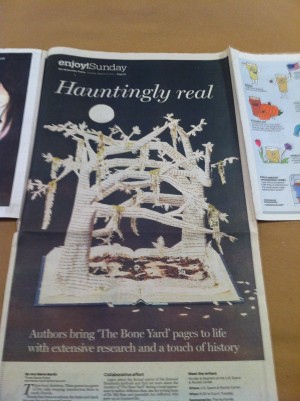 After meeting Bethany Bickley, I had to include one of her pieces. While she is working for a smaller paper and designing from the ground up - she really does everything starting from scratch - she's breaking into news design and that's inspiring. I thought her illustrations, especially this one, were really creative. She got a lot of support from judges, though I don't think her pieces got awards this year. Yet, she was thrilled to be a part of it all, which makes me really encouraged!