The New York Times Magazine features very simple covers rather than flashier publications found on newsstands. This might be because the magazine comes with the Sunday edition of the newspaper, so they don’t necessarily have to attract their audience’s attention with the cover. The function of each cover is to highlight one story they feel is the most important or interesting in each issue. These stories are sometimes accompanied by a headline, sometimes not, but they never exceed one headline. The images used are often bold and start to tell the story that will continue in the actual article. They often feature human subjects, but sometimes feature illustrations or cartoons. 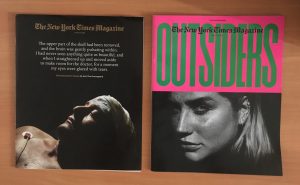 There is no strong pattern or style to images that appear on the cover. Human subjects are often filtered in black and white, but sometimes they appear in full, vibrant color, depending on the mood the editors want to set for the story. Kesha’s “Outsiders” issue (pictured in first image), for instance, gives a tone of her coming out of the shadows or emerging from the darkness, giving the black and white filter a purpose.

Folios in The New York Times Magazine appear at the bottom of the page, like many magazines. Folios also appear in a different font (which is sans serif) than the body copy (which is serif). This provides a small yet significant contrast and allows the magazine to use that font elsewhere to accent elements like captions or pull-quotes.

The cover’s sense of hierarchy changes from issue to issue but remains unlike most magazines. Most often, like in the covers pictured above, the nameplate is not the largest thing on the page. The editors likely intend for readers to see their images first by making them large on the page or giving negative space around them in order to draw the eye to the subject. The cover line or a small body of text will likely be next, and it will be given similar treatment either by having negative space around it or making it bold through color or style. The nameplate is small because it doesn’t extend the full width of the page, which means it is typically the last thing to be seen, but it is powerful because it is based on the New York Times pre-existing brand.

Consistency from issue to issue is maintained within the publication’s simplicity. They follow the same structure each time, using only one subject, one cover line, and a simple nameplate. While the nature or style of the images used may not remain the same, the structure and hierarchy does, granting the publication a sense of overall consistency for each issue. The attitude differs from cover to cover, but the overall tone is often bold and thought-provoking. This is why the magazine has to pick the most interesting story to feature on its cover, in order to set the tone for the entire publication.

The table of contents typically fits within two pages in The New York Times Magazine, and most times, the layout is simple and straight-forward like the rest of the publication. In some instances, like with Culture issues, the table of contents has more artistic freedom in order to highlight the most interesting stories while maintaining the theme of the cover story. These issues have much more interesting TOCs and show more photographs and details about the stories within the publication. 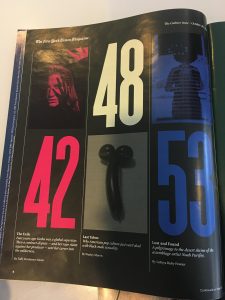 The TOC from the culture issue is much more interesting than the usual TOC. 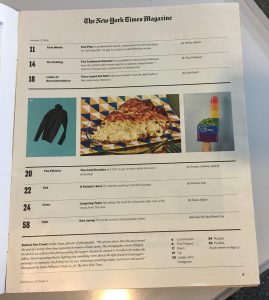 A typical TOC for the NYT Magazine is very simplistic.

In both types of TOCs, images are used to give context to longer stories or ones that have the biggest followings, like stories based on Instagram accounts.

As for departments, The New York Times Magazine is rather small, meaning only about one story fits under each “department,” but they are recurring. These departments include “First Words,” “On ____” (a certain topic like clothing or technology), “Letter of Recommendation,” “The Ethicist,” “Eat,” “Lives,” “Talk,” and then the cover story. These typically follow the same order with each issue, allowing the stories to increase in word/page length as the reader progresses through the magazine. Each of the individual stories have their own titles, but the specific section they fall under are found in the upper corners in order to offset the folios found at the bottom, which is set in the same font to provide consistency. 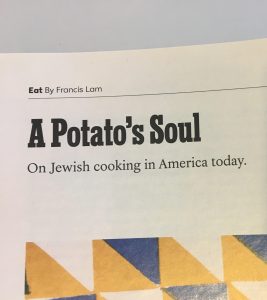 Departments are designated at the upper corners of a page.