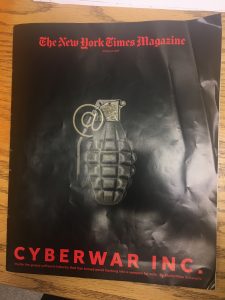 Format: The New York Times Magazine is a weekly magazine with an average page count of about 50 pages. The dimensions are 8 7/8 inches wide and 10 ¾ inches in height. While The New York Times Magazine is a magazine, its primary focus is on news. It works because it preserves some of the elements of a newspaper by being published more frequently than other magazines and being more text-heavy in order to fit the New York Times brand. While the size of the magazine is different from the newspaper, the layout of the text makes it feel like a newspaper, especially with the amount of text and columns. These choices are successful because the magazine finds a unique balance between newspaper and magazine, primarily in its design. The designs aren’t in-your-face or very abstract, but rather go for subtle yet intentional design choices in order to convey the message of the piece.

Grid: The margins are 13/16 inch at the top, ½ inch at the bottom, ½ inch on the left, and ½ inch on the right. This seems a bit tight compared to some magazines which doesn’t quite work because there isn’t much breathing room and there is a large amount of text on each page. The gutters are 7/8 inch, which – although it is small – is refreshing since it is usually the most amount of white space on a page. 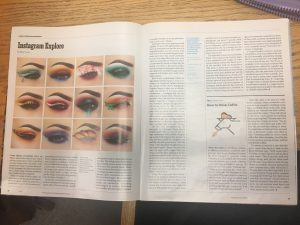 Including the fourth column for pull quotes or captions (like the spread above) makes the page look more dynamic and interesting than pages without because not each column is the same size.

Layout and white space: In New York Times Magazine, there is typically no more than one story per page. Shorter stories, like recipes or Instagram tips, range from 2-3 pages. More in-depth articles like features or profiles range from 6-7 pages. In most instances, there is only one photo per spread, but features sometimes contain two. Some pages, however, have absolutely no photos, which says something about the publication as a whole – they rely on words and the layout of those words rather than photos to tell a story. The photographs they do choose are rather self-explanatory, which means the publication hopes to evoke emotion with design and text. This works for the New York Times brand because their readers are often readers of the newspaper, so they’re expecting content-driven pieces. This wouldn’t work for most other magazines, though, which often rely on design and photography to appeal to readers. 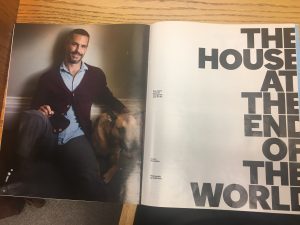 Stories themselves don’t often feature much white space, but the opening spreads for features and profiles do. A piece by Jon Mooallem (pictured above) opened with a simple layout that had an effective use of white space. The white space not only allowed for space for the photo and story credits, but it also pushed the text far to the right of the page, which reflected the idea of the title – “The House at the End of the World.”