In 2015, The New York Times Magazine was relaunched with custom typefaces created specifically for the magazine. The typefaces (all under the name “NYTMag Sans”) include a text serif, headline serif, display serif, slab serif, and a sans serif option in order to give the publication some variety in the design of a page or spread.

NYT Magazine uses the Text Serif typeface of NYTMag Sans for its body copy, which – according to the creators – was based loosely off of fonts like Garamond and Astree but modified to be legible in a small point size.

Headlines are most often set in the Slab Serif typeface within NYTMag Sans. The bold weight of the font works because it contrasts the smaller, thinner body text very well. (Features typically use different fonts for headlines, but they vary depending on the issue and content of the feature.) 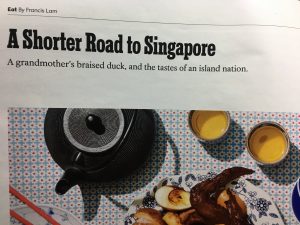 Cutlines and captions are set differently throughout the publication. Some photographs and illustrations have no captions and are only given credit beside the folio at the bottom of the page. Other times, the captions are near the photograph/illustration, but are styled differently depending on their location within the magazine (i.e. features versus front-of-book pieces). The inconsistency gets confusing sometimes, but the lack of a cutline or caption sometimes allows the piece to flow much more smoothly. 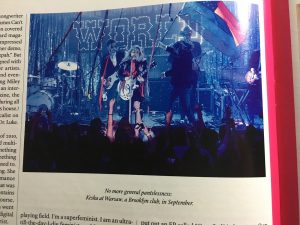 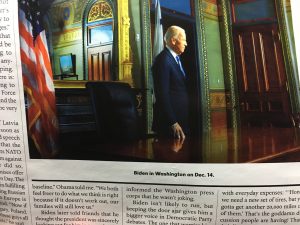 Another uses a completely different typeface and styling

Display text is also styled differently depending on the content, but most often, they use the NYTMag Sans typeface designated for display text. It seems just slightly different than the body text font and is more legible at a larger size. 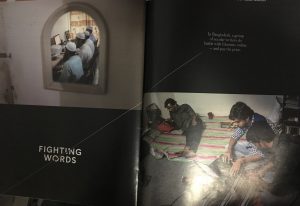 On the right, the NYTMag Sans typeface for display text is used

Although NYT Magazine typically stays within a set number of typefaces, it adds contrast and variety by adding different weights and sizes within a page. A typical department front (pictured below) reflects the layout used for most of the other department fronts, where the slab serif typeface is used for the headline, the body text is set in the typical text serif typeface, and sans serif is used for the by-line, folio, photo credit, and caption. This seems to illustrate the standard guidelines for a page or spread, and most other pages follow a similar format. 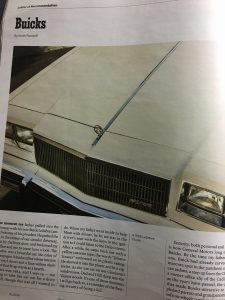 The typical styling of text for a non-feature story

Size is typically consistent throughout the magazine in regards to body text, headline size (excluding features), and caption sizes. This is likely because the magazine usually has about one story per “department,” so it provides some consistency even though the content is drastically different from page to page.

The style of the text varies according to the content of the page. Sometimes, like on department fronts, designers set the first few words in bold rather than using a drop cap. This makes it so none of the body text competes with the headline, which is usually just above it. Italics are sometimes used in captions or recipes, but the designers seem to prefer switching to a different typeface for captions and pull quotes. 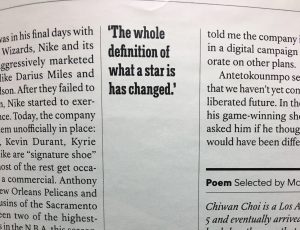 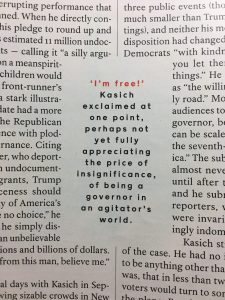 The typefaces used in NYT Magazine convey the classic nature of the magazine with a modern feel. The tone is not quite light-hearted or gentle, but not bold or aggressive, either. It is more neutral while remaining contemporary, allowing the content to speak for itself.