The New York Times Magazine relies primarily on black and white to tell stories with text. Photographs are often (not always) in color and are typically the most colorful elements on the page. That being said, the magazine sometimes uses a vibrant blue color as an accent color for things like captions or smaller pieces of information. 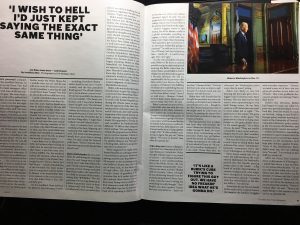 Black and white is used for almost each element of the publication besides images.

Body copy is always in black as are headlines almost 100% of the time, the only exception being feature stories, which are slightly more abstract and have more freedom in terms of design guidelines. Cutlines and display text are typically black as well, but as mentioned before, blue is occasionally used for a pop of color. 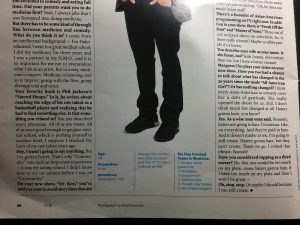 Blue is used as an accent color, usually for captions, cutlines, or additional info — but not consistently, which is confusing. 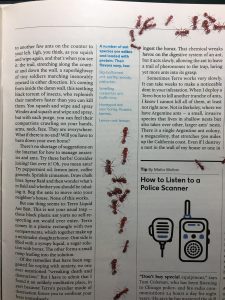 The blue adds a pop of color to set certain sections of text apart.

Sometimes, the publication’s designers introduce color in features and profiles – but not always. Often times, these colors contribute to a greater theme that ties the entire feature or sometimes the entire issue together. 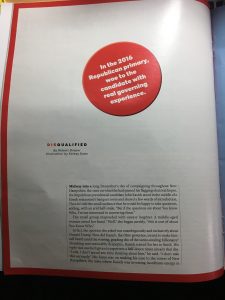 Color is occasionally introduced in feature stories aside from photographs.

This was done particularly well in the culture issue in which Kesha was featured. Special issues like this are designed in a separate style from a regular issue, but this specific instance worked because they made the issue cohesive through color and typography. Since Kesha was the cover story and the magazine felt black with vibrant pops of neon described her best, that was the theme throughout many sections of the issue and her profile story. It helped convey a specific tone and made the magazine more cohesive. It also showed how color doesn’t have to be the same to convey the same tone, as many of these colors were different but all fell under the bold, neon category. When paired with black, all of these colors seemed to fit together perfectly. 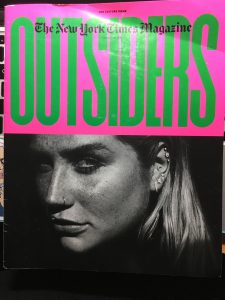 The colors and typography from the cover of the culture issue were used throughout the rest of the issue. 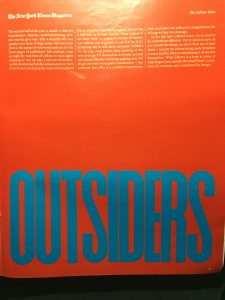 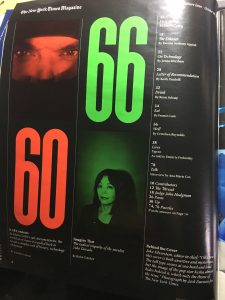 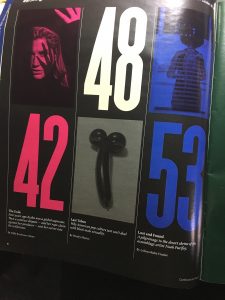 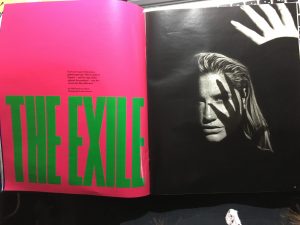 Cover story in the culture issue 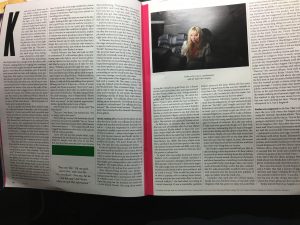 The same colors were used in the actual feature story

The Kesha feature also showed a rare case in which the magazine uses some black and white pictures. This is often done to convey a more serious, intimate mood, but is also done in photo stories likely for a sense of consistency.

Overall, the primarily black-and-white color scheme works for NYT Magazine, primarily because it conveys similar qualities to the newspaper without losing their identity as a magazine. The colors are classic and straightforward, much like the brand as a whole. Readers can find familiarity through the colors, layouts, and designs, which in turn makes the magazine seem more reliable and credible – which is essential to a magazine of this nature. The color choices are distinct of the specific magazine and forces them to find hierarchy through other design elements like text size, weight, and placement, which they seem to have a dynamic understanding of. This allows them to avoid the serious, bland tone often associated with black and white, since they convey other messages with their typography. 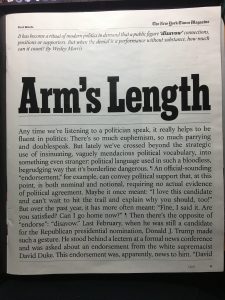 Even without color or image, NYT Magazine develops hierarchy with weight, typeface choice, size, and placement.

I do, however, feel the blue accent color is underutilized and the design would work more if the color was used more consistently across the same elements in each story and issue.