The New York Times Magazine’s design approach is simple and straightforward, and although it doesn’t feature much furniture, it uses many of the same templates for stories so each issue is consistent with the next.

One element that is used throughout each section of the magazine is lines. Most times, these are thin lines used to break up columns of text or separate the folio from the body copy. These lines are occasionally thicker when used in certain pull quotes or cut lines, but the thinner lines are more consistent throughout each issue. They help guide the reader through the page and provide barriers signaling when to start and when to stop. The magazine could probably use thicker lines more often to offer some contrast on pages that are lacking it. 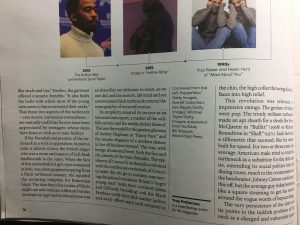 This page features both thin and thick lines to distinguish between different blocks of text.

The magazine only uses drop caps in its feature stories, but they set the first few words in bold in each of the stories from other sections. This design choice isn’t used by every magazine and helps The New York Times Magazine set itself apart while maintaining a sense of consistency with each section and issue. That being said, at first glance, it can be difficult to sense where a story starts, and drop caps tend to help add character and break up bigger blocks of text. 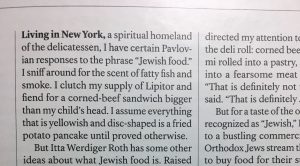 The first few words or the first phrase of an article are always set in bold rather than using drop caps (aside from feature stories).

Each article ends with a diamond shape to let the reader know the story is finished. This basic shape is consistent with the simple design of the magazine and helps guide the reader especially when there are multiple stories featured on a page. The magazine could afford to use more shapes or icons like this in order to better distinguish each section and add some variety to the pages.

Each story ends with a simple diamond shape to let the reader know the article is finished. 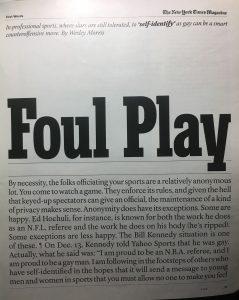 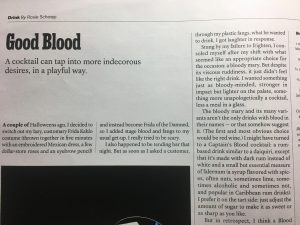 Other sections within the magazine feature white space below the hed and dek.