While this course is aimed at challenging and growing our design chops, an understanding of copy and language with regard to tone and personality is just as important because they are one of the many factors that will help guide our design choices. For Cooking Light, the language works to enhance the overall tone of the publication, which is simple and to-the-point yet comforting and inviting. Targeted at middle-aged cooks with families looking to improve their culinary skills in a healthy manner, the language needs to be simple and clear enough that their readers can understand what they’re making and how they’re making it. With that said, it is also important for the language to command a sense of trust through encouraging and comforting text since these recipes are aimed at pushing people out of their comfort zone a little.

The name itself, Cooking Light, reflects this simplistic approach to language, very clearly stating that the magazine is about food and cooking technique through the incorporation of the word “cooking”. While light might not be as apparent, it alludes to the healthy approach to cooking that the magazine takes. While it may not be clever or catchy, it allows for very little doubt concerning the magazine’s content, and that in itself is reflective of the publication’s overall brand. With that said, I do believe that magazines can be more impactful and intriguing upon first glance if their title is attractive and clearly thought out and that is something that Cooking Light lacks with the current version. 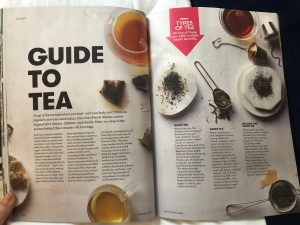 On brand with the rest of the magazine’s text, the headlines are also to the point while still embodying a welcoming vibe through thoughtful word choice, such as in the headline “A short guide to a healthy gut.” While the content is essentially an explanation of the article, terms such as gut, rather than stomach, provide a more relatable and less scientific approach to the content. Additionally, the headlines almost never extend beyond five or six words and are always accompanied by decks, which also embody the magazine’s assertive yet calming tone. For example, in an article about tea, the deck was written as follows, “A cup of hot tea nourishes your soul – and your body, too: Drink tea regularly and you could reduce your risk of heart disease, neurodegenerative disease, diabetes, and obesity. Here, we steep in the science behind this centuries-old beverage.” What is interesting here is while the Headlines are kept short and concise, the bylines are consistently long and drawn out, most likely in order to provide context for the simple headline. 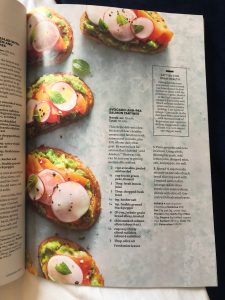 While pull quotes are not used, sidebars or small blurbs of additional information used for the purpose of enhancing the overall article or recipe are often employed. Again, these short blurbs are straight and to the point, but they harness the power of information to provide a sense of trustworthy information, such as in the picture below where it states “Eat fish for brain health: Eating fish like tuna and salmon once a week has been shown to slow decline in those with the Alzheimer’s gene, thanks to the high content of omega-3 DHA fatty acid, which reduces oxidative stress and slows plaque buildup.” Since these are not official pull quotes, they are assumed as an addition to the article and do not need to be separately attributed.

Since the magazine is driven by photos on each page highlighting the recipe, Cooking Light has chosen to omit cutlines and captions entirely since it is rather clear that the food on the page is what’s in the recipe. Additionally, they have chosen to omit labels and bylines/credit lines, since most of the magazine is recipes over articles. While I understand why, I also believe the photographers and writers deserve credit for their work outside of the masthead. As for section names, like the rest of the verbal style, their titles are extremely straightforward and generic, such as “Lunch” and “Snacks, Desserts, & Drinks.” For the few promos and refers that are included throughout the magazine, they are more “newsy” due to their adoption of the same stark style used throughout the rest of the magazine and normally not longer than seven or eight sentences in total. Collectively, these choices inspire a clean and straightforward visual feel that is apparent in all design aspects of the magazine.