SEPTEMBER 2019 ISSUE: Fast Co. divides its magazine into several categories. Like most magazines still in print, there’s a Front of the Book (FOB) which consists of just the Letter From the Editor, and several full-page ads. There’s no small fixtures in the FOB, the beginning of the book really starts with their section titled “Next” that features different things, people, ideas etc. that they think will become the next big thing. These stories range from Elon Musk and electric cars for the “Next: big idea” to “Next: data dive” on how billionaire tech CEO’s are investing in education. 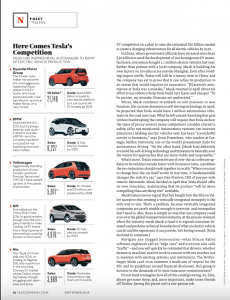 These Next stories are organized by their sections, there are Next stories about Tech, Impact (meaning things/people/events etc. that are having a positive impact on our environment, society, social issues etc.), Creativity (that usually feature innovative people in the business industry, like how James Vincent and his company FNDR are helping companies create a unique brand voice ), and Co. Design, which usually focuses on big picture design flaws and people who are creating new ways of designing. Co. Design is one of the most unique sections within Next, through looking at numerous issues of Fast Co. the section ranges from Q&A’s with a model turned activist calling for a reform of the whole modeling industry, to an exhibit designer, Aki Carpenter who strived to make her creative vision for the African American History Museum capture the attention of adults and children. 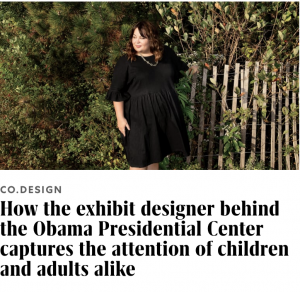 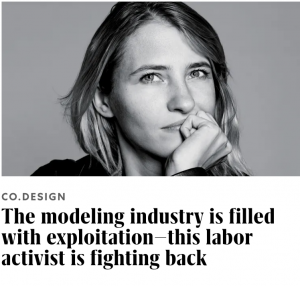 Then comes the “Departments” section, which is a little confusing because typically “departments” refer to the sections in a magazine. So it confuses me a little why they would name a department, “Department.” But after browsing through this section in several of the issues, it seems like this section is usually a Recommendation section. And when it is, is just dubbed “Recommender” and branded on each page with an uppercase R. 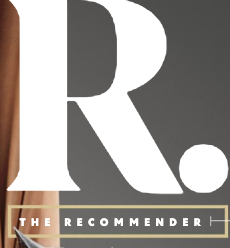 There’s anywhere between 7-11 recommendations per book when they include the section. Some are things celebrities recommend, others are small alternate story forms like a “Reading List,” “How to cut plastic out of your kitchen,” “Necessary Vice” which was a brand of Tequila. This section is subject to change. In their most recent issue, “The Secret Of The Most Productive People” Winter 2019/20 book, their Recommender section was just a gift guide to the best holiday gifts of the season, but they did it in a clever way. The products they recommend were taken from the recommendations of people who work in that specific industry. So to differentiate their holiday gift lists from every other publication who does them around the holiday season, they did lists like “The best gifts for foodies, according to a Sweet Green employees,” which personally captured my attention and makes me trust the recommendations even more because they come from people in that specific industry. 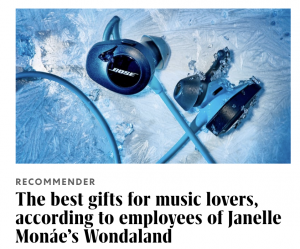 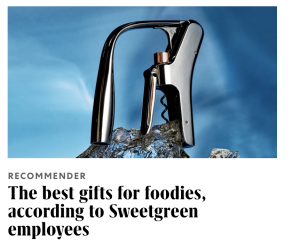 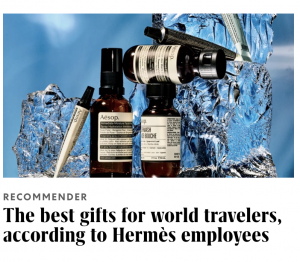 Then comes the feature well just dubbed “Features” in the magazine. There’s anywhere from 9-16 features per book. Usually it depends on the theme of the magazine. Since Fast Co. is a publishes eight times a year, so twice every four months, which makes it a bi-quarterly magazine. Since they don’t publish as often as most other business magazines. Fortune, Bloomberg, WIRED, and Business Weekly all publish more often than Fast Co. So, I assume to differentiate themselves they have a theme to almost every one of their issues that directly impacts their feature well. Some of their staple themes are “The Most Productive People” issue, the “5o Best Workplaces For Innovators,” the “Innovation by Design” issue, “The Most Creative People In Business” issue, and more. So, in the case of these very specific themes that usually highlight specific people or companies, the feature well is dedicated to profiles, usually short ones because they have to include so many, about what makes the person, company, or thing so special. For example in the September 2019 issue “50 Best Workplaces For Innovators” started off the well with a double page spread introducing the section. 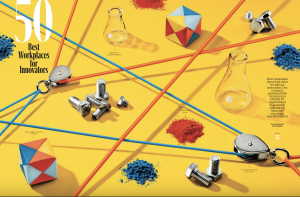 The bright colors and fact that it takes up two pages, shows the reader that they’re switching gears and moving into the meat of  the book. The mini profiles on each company takes up eight pages. 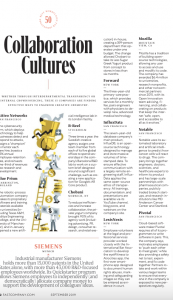 They’re grouped into sections that explain the different types of companies, like you see above. And then they move on to several longer-form profiles on one company or CEO that they’re picked out of the herd as being even more innovative, and probably more interesting for the reader than some of the other companies. These longer form features begin with a very different looking double page spread for each one. The spreads introduce a new idea to the reader and their stark contrast in color and image feel/placement allow the reader to know that they’re moving gears again into a new story. 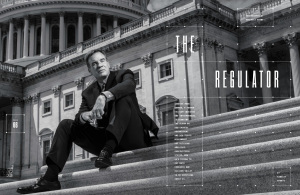 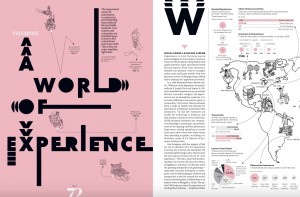 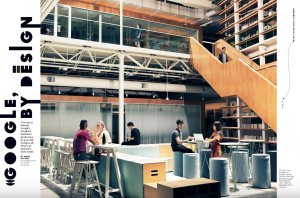 These three double page spreads vary by color, graphic elements, and feelings depicted by the photographs or visual elements. But all of them all knit together with the color black, as well as the “World of Experience” and “Google by Design” spreads sharing the same font.

After the feature well, there’s not much of Back of Book (BOB). The only thing after the last feature in the Sep ’19 issue is a light, fun, cartoon (pictured below), and a few ads. I assume that they don’t spend a lot of time, energy, or money on small BOB fixtures like horoscopes or quizzes because it doesn’t appeal to their audience, and because they publish fewer than a lot of other magazines, they want to give as many pages to real reporting as possible.,