Libération is a very photo-oriented newspaper, and there isn’t a set rule regarding photography. In general, the majority of the stories have a photo, which usually takes up approximately one fourth to half a page or even the whole page. In fact, almost every page of the publication has a photo, whether it is a dominant or small image. Also, most of the stories include a single dominant photo instead of multiple images. Different sizes have different purposes. A dominant image is used to grab the reader’s attention, while small images are often used to create a break on a heavily text-based page for the readers. 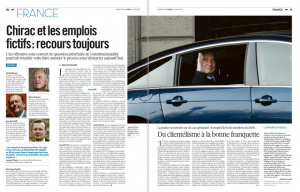 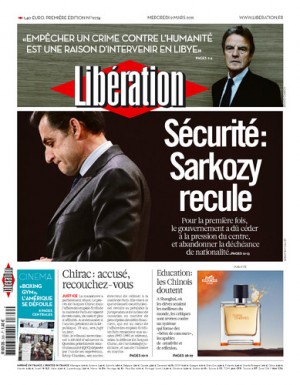 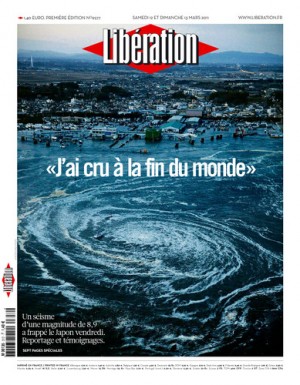 The A1 of Libération sometimes has a single dominant image that covers the whole page, but often times, there is a dominant image along with other smaller photos. Headlines on the A1 are placed on the image. However, on the inside pages, images rarely have text on them. Captions and credit lines are usually found below the photo. This allows the readers to focus on the image itself rather than being distracted by the text. 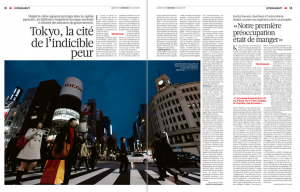 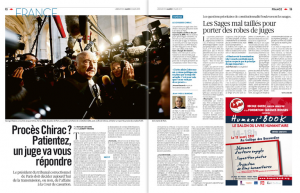 As for the content, the photos represent the stories well. Most of the time, readers can tell what the story is about without reading the headlines and the story. However, there are times when the publication uses vague photos where explanation is needed. One of the reasons is that Libération frequently uses perspective shots. This technique is used to engage the readers and to capture their attention before they get to the actual article. These perspective shots draw the readers into the scenes and make them feel as though they are part of it. 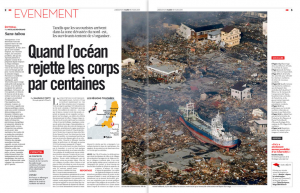 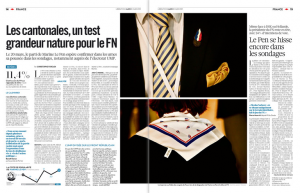 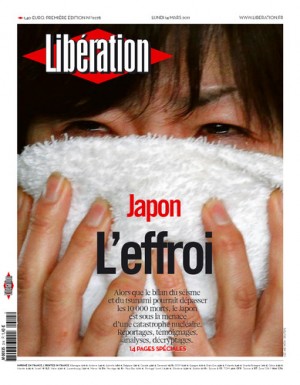 This brings up another point that Libération uses either really wide or tight close-up shots. It is usually the tight close-up shots that need more explanation, since the readers cannot really tell what the story is about. The publication uses these styles to convey emotions, and the photos definitely play a crucial role in setting the tone of the story. As shown above, the close-up shot of the woman delivers her grief to the readers. 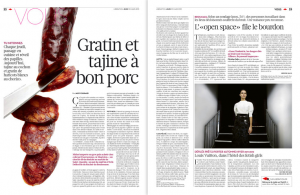 As for the shapes of the photos, most are horizontal/vertical rectangles. In some sense, the shapes depend on the type of news story. For hard news stories, the photos are in rectangles. For soft news stories, such as in the Culture, Vous (“You”) or Grand Angle section, different shapes are used. As shown above, it is a tight close-up shot of a sausage that is not the typical rectangular photo. 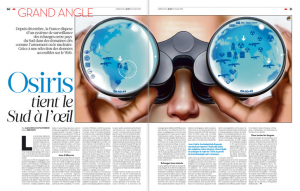 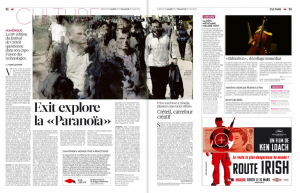 In addition, soft news stories tend to have photos that are less formal and more creative. In the two examples shown above, both of the dominant photos are photoshopped. 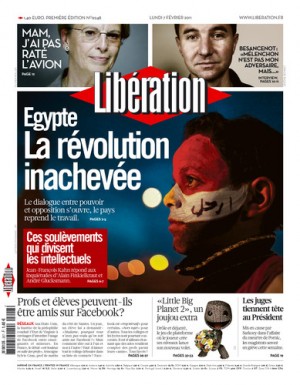 In selecting photos, Libération considers the main colors of the publication, which include: red, black, white, aqua blue and magenta. Thus, the majority of the photos consist of these colors. This is especially true on the A1. As shown above, the dominant of the image contains red, white, black and blue. This technique strengthens the overall design and uniformity of the publication. In addition, black and white images are seldom used and can be only seen in soft news sections. 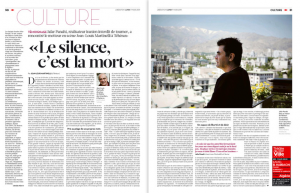 Moreover, Libération effectively uses photography for hierarchy. In the example shown above, the dominant image on the right page initially captures the reader’s attention. Because the person in the photo is looking towards the left, this naturally leads the readers’ eyes to the headlines and then to the article.

Overall, Libération does an excellent job in using photography. I would say that photography takes up more than half of the publication. However, it does not necessarily distract the readers. Rather, it enhances the reader’s experience because it supplements information that the readers might have missed from just reading the headlines or the articles. Moreover, I think the fact that Libération does not have a set rule regarding photography allows more room for creativity and also strengthens the personality of the publication.