There are four different local sections in addition to Expresso. Expresso also includes a magazine section called Revista (which literally translates to “Magazine” – how original). 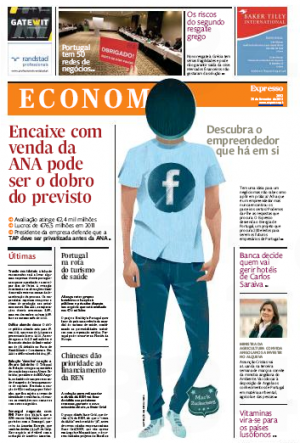 Economia is translated to mean “business”. Out of all the local newspaper fronts, Economia is the local front that most resembles Expresso’s A1. Both covers have a reverse nameplate, although the typefaces and background color are different. Other similarities include a similar varying hierarchical system, with a main focal image and a large A1 headline in a red color. The promos, refers and teasers are also located in the same place and are treated graphically in the same way. Both covers have a four-column grid. The reverse nameplate separates the content and the ads. Both have a serious tone that reflect the type of information inside. 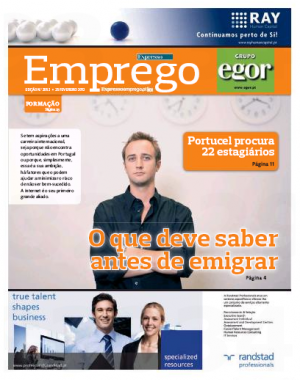 Emprego is translated to mean “employment”. There are still some similarities between this cover and Expresso’s A1 but it is leaning more towards a magazine-like cover graphically. Emprego’s reverse nameplate also uses the bright, orange color like Economia does, but the typeface is also different. Although all of these nameplates are similar, I agree with Expresso’s decision to make each a different typeface to differentiate each local newspaper. In my opinion, I think it would have also been a good idea to use a different background color for each nameplate, so readers can more easily differentiate each local section by color. Emprego is separated into three sections created by large horizontal rules. The top and bottom sections are left for advertisements. The middle section contains the A1 headline, but the article does not begin on the front page like most newspaper fronts, but instead includes a page number to send the reader inside. Very few promos are also included in this section. The hierarchy also remains the same for all local sections and Expresso’s A1, with a large, main image and an empowering A1 headline. 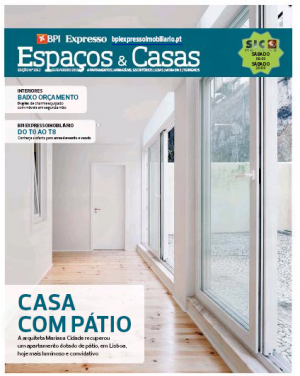 Espacos & Casa’s, translated means “Buildings & Homes”. It has the same nameplate treatment. Besides the nameplate, it is quite different from Expresso’s A1. Espacos & Casas is more like a magazine front. There is a background image that bleeds past all edges of the cover. There are few teasers and a main headline and deck with no article beginning on the front. 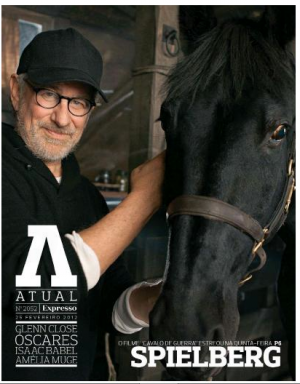 Atual is translated to mean “Current” or “Modern”.  This local newspaper front is most similar to a magazine cover and can be seen as most similar to the United States Features or Lifestyle sections.  This cover front in particular contains teasers about the Oscars and movie director Steven Spielberg. It has only short teasers at the bottom left section. The bottom right teaser, which is also the main article, is larger and bolder to tell the reader it is more important. This graphical magazine-style treatment is appropriate for this section because the target audience is most likely a younger age group.  This local section is the only one that has a very different graphically treated nameplate. It has one large “A” with the name of the section seen underneath it. It is simpler and playful, to the more friendly tone of the section. 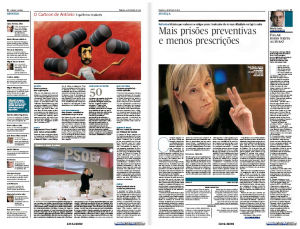 Within the inside pages of Expresso, there is a great sense of hierarchy, color and fluidity. Color is used both within the images and all of the graphics. There is not much color variation and not a lot of color used in general throughout the publication, but when it is used, it is used in good taste. The main color that is used is the same blue color located on the background of the nameplate. Color is also used to bring out the section names or brings attention to certain sections by creating colored banner heads that spread across the width of the publication.

Something interested I noticed is the number of images used per article and per page. There seems to be only one main, large image per article,mimicking the A1. In order to achieve this, Expresso must have 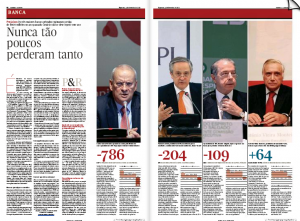 an amazing photographer(s) who have the ability to capture the best moments/actions/events ect. for each article. I think that this publication is very talented – it takes a lot of risk to pull off just one main image to portray the entire story, but they do this extremely well. Each image is compelling, and tells a particular story. As the famous saying says, A picture tells a thousand words. And all of Expresso’s images do just that. Each image creates a specific emotional and impactful feeling. Although there are not many images per story, they are often large and empowering. I would say that images take up about 40-50% of the publication.

All infographics also contains color and shades of those colors. Often 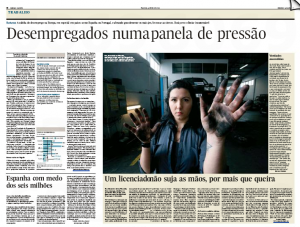 times, those colors mimic the colors of the section heads or names. Each infographic is designed in a strategic, organized way. They are very playful.  Another smaller graphic that is used numerous times can be seen similar to a pull quote. An important number/percent ect. is pulled out of the article, greatly enlarged and treated graphically the same throughout.

Other architectural elements that Expresso uses throughout the publication include a larger amount of white space than most normal newspaper insides. The white space used helps to make the writing around it easier to read. A lot of white space is usually used before and/or after pull quotes and after headlines and decks. Varying rule widths are also used on every page to guids the readers eye around the page. Many headshots of either the writers or people within the articles are also used.

There are not many advertisements in this publication. I would say advertisements take up about 20% of the inside pages. When they are used, they are mostly quarter-page or full-page ads. The quarter-page ads are almost always located at the bottom since they do not have as much importance as the articles.