On the front page, everything is black and white with color photographs. Having the photographs in color with seemingly no manipulation conveys the Los Angeles Times’ mission of fair and honest journalism. Unlike magazines, newspapers don’t typically stylize photos with color filters because that kind of manipulation goes against photojournalism ethics. This is key for how the paper is perceived by its readership – the more real and natural the photos look, the more the images can be trusted by readers.

The Los Angeles Times does utilize pops of color in the display copy of some sections, as pictured below. This helps distinguish these sections as being different from A1 stories. It also helps give the section a bit more personality. Using red in this “Back story” section gives a sense of urgency. We often see the color red used in breaking news packages online and on TV, which helps communicate that something is important, like a flashing red emergency siren. 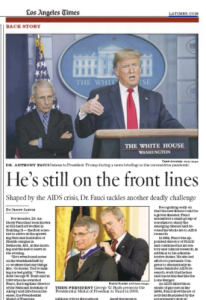 It seems The Los Angeles Times only uses black and white photographs when it’s necessary. The image below was naturally black and white, so the newspaper had no choice but to run it as such. The only pop of color on this page is the photograph of the two people below the dominant image.

The rest of the paper follows the same color guidelines, with some of the section fronts getting color treatments. For example, the business section has a green flag background because green is associated with money. The state news section name is orange, perhaps hearkening to the sunny, warm nature of California. The newspaper doesn’t repeat the colors it uses in these section flags.

The most colorful page in The Los Angeles Times, on a regular news day, is the comics page. Half of the spread is in black and white, while the other half is in full color. Having such a bright comics page helps the reader distinguish between serious news and lighthearted comics. 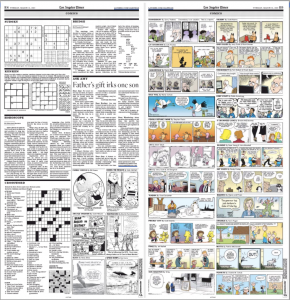 The lack of color throughout this publication gives readers the impression that the content should be taken seriously. In fashion and other design, black and white is often perceived as the height of sophistication. It’s important for newspapers to be taken seriously by the public because if their content is not respected as trustworthy information, the publication’s reputation is at stake.