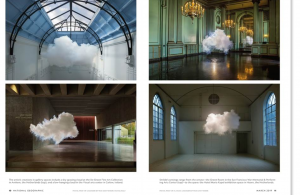 National Geographic uses several photos throughout the magazine. National Geographic uses a variety of shots. You can find multiple examples of wide, medium and close-up shots. Most of these images are very large, take up a lot of space or all of the space on a page. The section Proof is just a collection of photos with captions and short blurb at the end of the section. Every story does ha ve at least one photo but stories usually have many photos. Many times, the image will have text on it. Usually, this will be a caption but a sidebar may be placed over it as well. 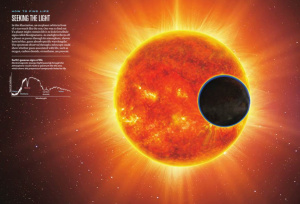 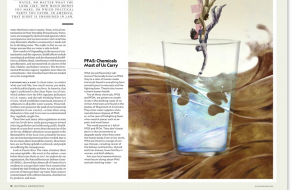 Pictures are not superimposed. They are typically rectangles; sometimes for a sidebar or some element, an image may be a circle or cropped out. For example, there is a profile of someone and they did a cutout of him and enlarged it on the page. 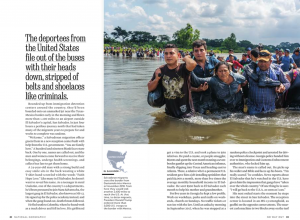 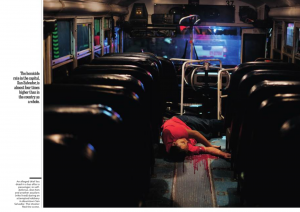 There are also more newsy stories that have several pictures. The images are usually have action in them. One feature has on migrants in El Salvador has an image on every but one page  (pgs 76-99). There aren’t several images on a spread; usually there’s only one/two images per spread and are usually large. The images show many aspects of migrants escape, their home life (portraits), community life, crime, an infogrpahic (that takes up an entire spread).

For science stories, images are a combination of active and passive images. There are photos of machinery or objects. There are also images of scientists doing things (very cool things) so it makes up for a lot of the still images used. There are also many landscape photos used. 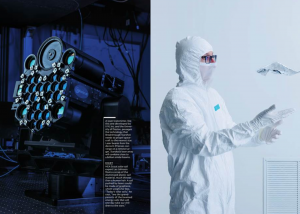 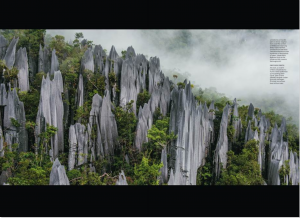 I feel their images speak to the identity and mission of the magazine. Since it is about science,exploration, people, it tells stories with an array of images.