I think the National Post uses Typography exceptionally well. According to www.fontbureau.com, the paper uses a mix of Miller, Miller Daily and Poynter Agate. Miller and Miller Daily are the most commonly used throughout the paper. They are both serifs and considered “Scotch Roman.” The newspaper’s headlines are generally in Miller, While much of the body and subheads are in Miller Daily. Both of these typefaces were created by the same designer and, therefore, they mesh very well.

The paper sometimes uses Poynter Agate to signify the top story on the front page. Poynter Agate is a clean-looking sanserif. It is legible at very small sizes and perfect for details like charts, numbers, captions and attributions. Most of the Post’s headlines and subheads are in Miller, but some use Poynter Agate. This helps to draw the readers’ attention to a particular story on a black and white inside page like this page:

The National Post uses a number of different tools to convey heirarchy to their readers. First, the paper uses size. Size is probably this publication’s most telling typeface feature. On the front page, the largest photo is positioned in the middle of the page along with the largest type. Color is also a prominent indicator of heirarchy, but the combination of the large photo and the large text automatically trumps color on the page. 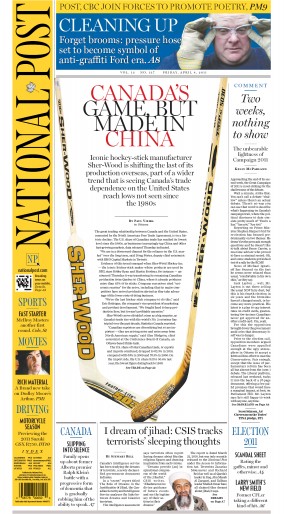 The Post also does a very good job at combining different fonts within their typefaces in order to create heirarchy on their pages. Most commonly, the Post will italicize certains words within a headline, or even entire headlines. The italic text, different from the rest of the page, stands out to the reader, even at a distance. 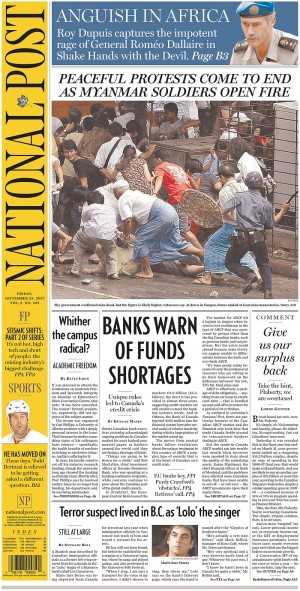 The National Post also tends to combine capitalized words with those typed in lower case. This is a kind of risky move, in my opinion, that could make the paper look more like a child’s coloring book than a legitimate news source, but the Post pulls it off. This kind of thing is usually used for feature-type stories rather than breaking news, which gives them a little more freedom in design without the risk of offending anyone. Overall, I love everything the National Post does with their type. I think type is actually something the Post does better than most papers. Type is what really sets it apart. 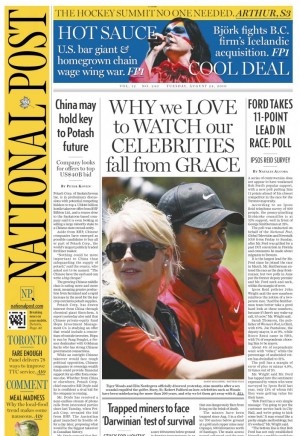