When you look at the cover of any given The Economist magazine, you eye is drawn straight to their red nameplate. On their website, the earliest covers they have available to look at come from the year 1997, but the magazine has been in publication since 1843. From my research, I believe they adopted that iconic red into their branding from the very start. With keeping the placement of the nameplate consistent with every single issue, consumers won’t be confused about which magazine they’re picking up. That red nameplate has become associated with a higher level of education, and its readers show off that name plate. In terms of hierarchy, the reader’s eye first goes to the nameplate, because it is the boldest, and then, for me at least, I seemed to consume both the headline and the cover image at the same time. The headline and the subtext sit underneath the nameplate, and are just a plain white type face, because the designers did not want the text to distract the reader. The last thing my eyes take in is the text box next to the nameplate that contains information about the other articles; it is written in a small, black font because the designers wanted the reader’s eyes to complete the circle of information. 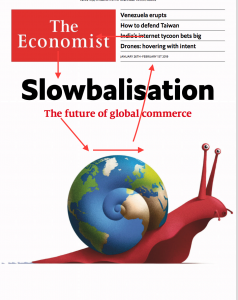 Another aspect unique to The Economist covers are the illustrations. Even as pixels, they look to be textured and have a lot of depth, but at the same time are not over complicated. The images are meant to have the reader formulate speculation about the main article of the issue. I believe these unique illustrations add character to the magazine, sending the message that readers of The Economist are those who are clever and can appreciate art. For example, on the January 5th-11th issue, the cover shows an illustration of the white house set against an orange background with the copy “Season Two” on the bottom. Though the headline alludes to the main story being about the second half of Trump’s presidential term, readers will notice the small Twitter bird hiding amongst the branches of a tree. Without blatantly telling the reader what a big aspect of the article will be about, The Economist wants them to figure it out for themselves via clues, because they know their readers to be intelligent enough. 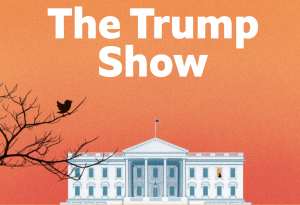 As I mentioned in my last blog post, I have some issues with the table of contents in The

Economist. For a magazine that prides itself in bringing as much content to their reader as

possible, it seems as if they forgot what pleasing design looks like. The first page is a three

column layout, white the second page is a much wider two column layout. I tried to figure it

out, but I don’t understand their justification for their spacing between sections. I understand

that the dividers of the story section start where the image ends, but I wish the designer had

figured out a way to make the page look fuller. Even though there are 50+ stories per issue, 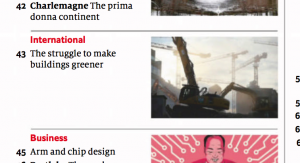