This field note assignment really had me wishing I remembered far enough back to MAG 205 to recall the specificities of furniture in a magazine, but alas I do not.

Letter from the Editor: In Stephanie Mehta’s letter from the editor she never makes it about her. It’s always about the book and honestly, more about broader issues in the world than anything else. For example, in the Nov. 2019 issue she starts out her letter from the editor like so, “Our economic system—once heralded for ensuring customer choice, stoking job creation and upward mobility, and sparking innovation—is failing us.” two em-dashes in once sentence? I think I love her. She’s making a statement, and setting the tone for the book simultaneously. She makes it clear she’s not here to cover anything up or persuade you to think a certain way. She is simply telling the truth of how she and their staff feels, and the message the the book is trying to convey. She doesn’t stray away from focus in the next four grafs. She sticks to capitalism and its downfalls, but also how there are people creating good in this capitalistic world. Not once does she mention herself or any personal achievements. I also think a very important fixture from Mehta’s LFTE is her photo. By all standards, it’s tiny. It’s not in the center of the page, but rather in the right-hand corner, right above her signature. She is so careful not to draw attention away from the book, and the true issues at hand. 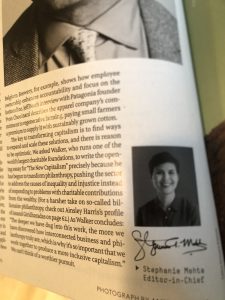 TOC 1 & 2: Fast Company does something very intelligent with their TOC, they split it up into two sections. First comes the features, the number varies depending on the issue but in the Nov. 2019 issue, there are three. All of which relate to capitalism or what Fast Co. is calling “The New Capitalism.” Then there’s everything else, on the next page. I think this helps distinguish what is a feature and what’s not, which, can be confusing for people who aren’t familiar with magazines. And it helps to further reinforce the overall message of the issue. The separation makes it so the reader is aware of the “The New Capitalism” theme and is able to easily identify it when they see it. 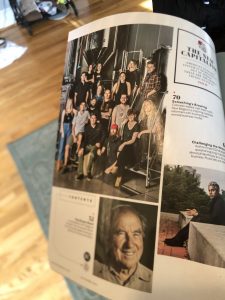 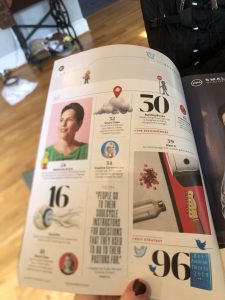 “Exit Strategy”: The last page of every book is dedicated to the “Exit Strategy” which is always a funny and lighthearted way to end the reading experience. I think this is a great idea, because Fast Co. does have some heavy content, it’s nice to give the reader a chance to exhale and laugh a little before putting the book down.

Navigational markers: Fast Co. uses simple navigational markers for their sections. For example, for their “Next” section that has many subsections, they mark it with a box with an upper case “N” in it and then a rectangle and inside it says “Next” and then underneath it has the subsection of the section. This keeps the reader on track and aware that they are still in the same section. But, they do change the color palette when the subsection changes, to show the reader they’re onto a new idea or topic. 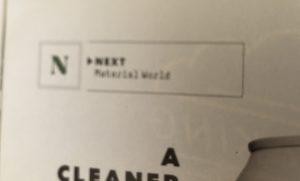 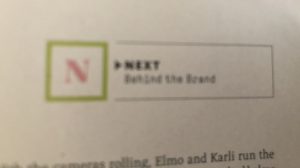 They also use navigational markers for their other sections, like their features. All their features in the Nov. 2019 issue had to do with the ideas of “New Capitalism” so their navigational marker was a little graphic and the words “New capitalism.” I think these markers are important to the identity of Fast Co. because it shows their structure and intentionality of everything they put on the page. They’re not just throwing a feature in there for no reason, it has to abide by the theme and the message of the issue. 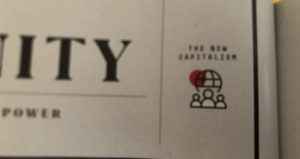 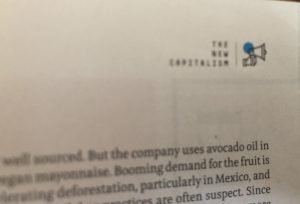