Belizio, released in 1987, was designed by David Berlow and Aldo Novarese. The typeface is related to Clarendon (Haas), Egiziano and Egizio, according to Fonts in Use. Belizio is an effective choice for body copy because it is a serif typeface with a mid-size x-height. There isn’t much variation in stroke thickness, which makes it easy to read large amounts of text. 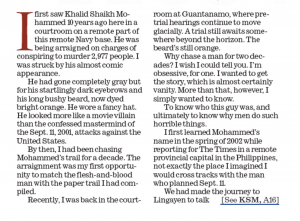 The Los Angeles Times typically justifies the text, but in the example above, it’s ragged right. This contrast to the typical alignment helps distinguish the story above as being the most important, and to acknowledge that it’s a personal column instead of a regular article written in the third-person perspective. The huge drop cap with a pop of color also helps the reader recognize that they should pay attention to this story when they first look at the page.

The Los Angeles Times does not use sans serifs fonts regularly, making the paper have a more traditional feel. Reliance on serif fonts in newspaper design is common, though, considering how much text has to be packed into a small amount of space and still be readable.

In the Sunday Feb. 9, 2020 issue, the hierarchy of the front page seems a bit off. The weight of the top left rail is lighter than the weight of the top right rail, so I’m not sure if it’s trying to direct the reader to the left, right or center story. Additionally, the bottom “Elizabeth Warren” has a headline in all caps, which contradicts the hierarchy of its placement at the bottom of the page. 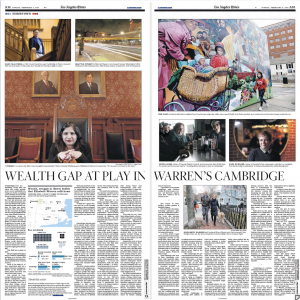 The extended version of the Warren story also has a headline in all caps, accompanied by a full photo spread. I think this is effective because it is consistent with the type treatment on the front page Elizabeth Warren story, while adding additional storytelling through photos and graphics. The Times also made a choice to use sans serif typeface in the infographic on page A14, since it’s so tiny. A serif typeface would have been harder to shrink down like that. But The Los Angeles Times isn’t afraid to use serif typefaces for smaller text – the captions are pretty tiny but still have serifs.

The display copy and body copy styling is consistent throughout the entire edition. A colorful “Election 2020” custom kicker is used to distinguish stories that are part of the series.

The Los Angeles Times’ current nameplate is a black letter (gothic) typeface. It has a double outline, sharp edges and thick strokes. It stands out against the headlines, most of which use a thinner stroke with ample white space.