Throughout each issue of The Atlantic, the main color used is red. Left is an example of how they use red to 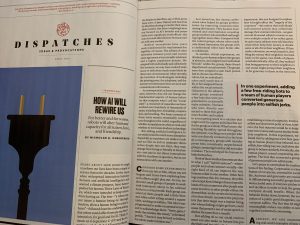 create hierarchy. Red is used at the top of each department section, along with helping pull quotes stand out further. Right above the head “How AI Will Rewire Us,” the color red also shows that this specific section of  “Dispatches” is about technology.

Another color that is used often is blue. With The Atlantic being a highly pol 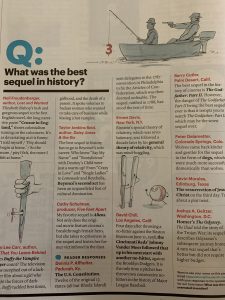 itical, American magazine, I believe the red and blue create a patriotic feel to the magazine. A variety of shades of blue are used, such as the background of the photo in the dispatches spread. When it comes to type, blue is also used in contrast with red. In this BOB feature, the blue Q shows the name while the red type helps separate the author name from their response, which is in black. This hierarchy helps the reader easily differentiate between the different parts of the body copy.

Overall, I find that The Atlantic uses color effectively to portray its patriotic mood and to allow the reader to easily understand the organization of the magazine. The red on its own gives the sense of boldness and excitement, while the blue alone creates a greater sense of strength and consistency.