Good publications consider the reader. Using “furniture” is one way to do so. Not only are elements of furniture an organizational tool, but if done well, they can serve as familiar landmarks, making it easier for the reader to scan and digest the publication.

The Atlantic uses many of these tools. To help with organization and context, The Atlantic’s folio appears the same in every standard issue, and photo/illo credits appear in this margin area in all instances except for feature stories (Figure 1).

Lines at the top of the pages distinguish sections. Those in Dispatches have a thick, black line, a section label below, and then two thinner lines beneath (Figure 2). The Culture File section also has one thick black line, but the two thinner lines only appear in the middle column with the section header (Figure 3). All columns in these two sections are separated by lines, called a column rule, even those in the gutter of the facing pages. 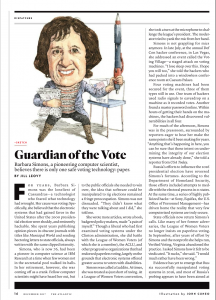 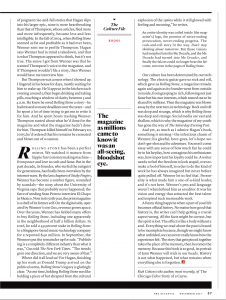 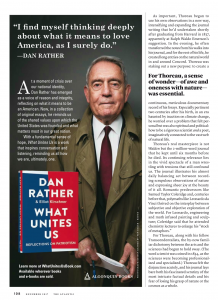 Both sections also feature a thick black line across the bottom, which grounds the two sections and unifies them, separating the features section (Figure 2 & 3). If a story in either of these two sections ends on a page facing a different story, two thick, black lines are used to separate the two (Figure 5). If a story ends on the same page as another starts or ends on a page directly prior to an ad, only one line is used (Figure 6).  The feature sections do not use templated lines, and the other content following the feature section only uses lines when a story meets an ad on the same page (Figure 4). 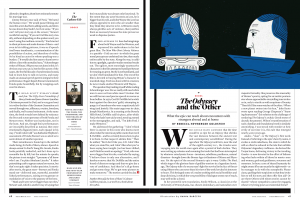 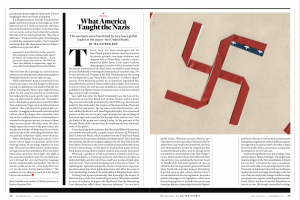 As far as column templating, Dispatches almost always has a three-column grid on both facing pages (Figure 2). A new article in The Culture File will begin in a two-column format (Figure 7), and the remaining pages of the article will have a three-column format with a thinner, middle column containing a pull quote or graphic along with the section title and label of the regularly appearing article (called a sig) (Figure 3 & 7).

To separate sections, templated formats like Figure 8 & 9 are used and are often called headers in magazine design. Though the icon or quote change, the template remains the same to anchor that section.

Within the Dispatches section, a templated element that is formatted the exact same in every issue is “The Studies” within the Study of Studies section. This article examines a scientific study and then gives references for the studies examined. This reference section is formatted the same in every issue (Figure 10). I believe the reason behind this choice is because of the nature of this content. Scientific references in a research paper are formatted the same to make it easy for everyone in the field to find related information, and The Atlantic has used this knowledge to create a similar “bibliography template.”

To help readers know when articles have ended, the Atlantic uses a red box with the trademark A within it (Figure 11). This bright marker called an “end mark,” serves to help the reader know how long articles may be or ensure they know the article is done after they have perhaps jumped across multiple pages to read it. Even feature stories do not differ from this end mark. 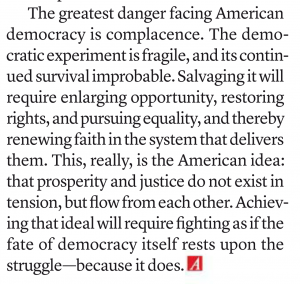 The Atlantic also uses a template for kickers, the first few lines of the story, so that they are similarly formatted across the magazine. Even in different fonts, the first three or four words are always capitalized (besides features), and they help to lead into the article and draw the reader’s eyes to the first few words.

Though these little pieces of “furniture” anchor the magazine across pages, some pages themselves are fully templated and rarely stray from the norm. If there is no reason to stray from a format, this can definitely help a regular reader know what to expect and what they’re reading before they even read it. An example of this is “The Big Question,” which appears at the end of each issue (Figure 12 & 13). 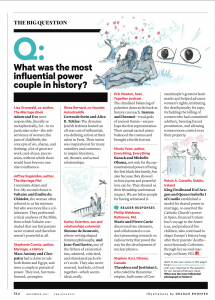 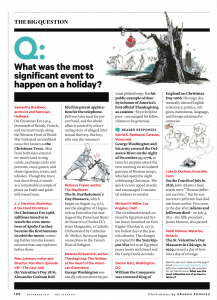 I think this exercise has given me the best idea of The Atlantic’s design and formatting out of all of our other Field Notes. At first, it appeared that the magazine had thick lines in some places and thin in others for no apparent reason. But after further analysis, I’ve realized that each of these lines or symbols has a purpose and are not placed there without a reason. I think most, if not all, of The Atlantic’s templated furniture works well, as I was able to find a solid purpose for each one.