The images in The Atlantic can easily be seen by examining the Table of Contents, which includes all of the main images for each story in the edition. At a glance, it is clear that most of the images in The Atlantic are illustrations. The Features section is the one clear standout, where photography is the main imagery. Most of the illustrations in the TOC are cutout and are not usually framed. Photography is usually kept in its rectangular shape, although there is an exception in Figure 3 with a circular-shaped photo. Almost all stories in The Atlantic feature an image (whether illustration or photo). While stories in Dispatches and The Culture File only have 1 to 3, Features stories usually have 6 to 12.

The tone of the photography in The Atlantic varies widely as well. Depending on the story, photography can range from whimsical (Figure 10) to serious (Figure 11). But in general, colors are close to earth tone and can often look muted or matte. Most subjects of photographs appear to be in passive mode, making the photographs feel more like portraits than of a photojournalistic quality. Figures 7, 8, 9, and 11 are examples of this, each from a different story. But there is no real consensus on crop, as wide (Figure 9), medium (Figure 8), and close (Figure 7) are all exhibited in different places. Photos are usually never superimposed and are rarely placed close together. In feature stories, where photography is most present, there are usually 1 to 3 images per two facing pages, and rarely more. Since stories are long, images are used across multiple pages to break up large sections of text.

Though I’ve found that the illustrations in The Atlantic generally play well together and feel cohesive across editions, some photography for feature stories doesn’t. Pioneers of a Forgotten Future (Figure 10) is one such feature story. If the photos were taken out of context, I wouldn’t be able to say that they were from The Atlantic. The colors are soft pastels, where images in the rest of the magazine tend to be either muted earth tones (Figure 4, Figure 6) or very bright (Figure 5). The designers at The Atlantic have a lot of leeway and versatility when designing feature stories, but it may be important for the photography to be a bit more on-brand in order to meld with the style of the rest of the magazine’s imagery. 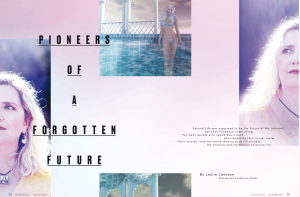