Personally, this is the field note assignment I’ve been most looking forward to; as an English major, I was always fascinated by the small differences certain words can make, even just to evoke a different feeling. The Atlantic‘s language choice is fascinating to me, because while it is an educated, political, and cultural magazine, it oscillates between quirky, attention-grabbing headlines and more serious FOB section heads.

Even the title evokes a certain feel, which I attribute both to the word choice and to hundreds of years of tradition packed into two words – The Atlantic. I think of its history between Boston and D.C. (both on the Atlantic Ocean) and the power and mystery of the open ocean. It falls in line greatly with the feel of the magazine in general.

Headlines tend to be attention-grabbing and give just enough of the article away without going into summary. 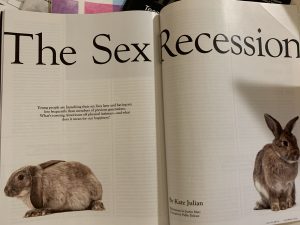 Take this example of a feature story called “The Sex Recession.” The headline is short and grabs attention (it is about sex, after all) while the dek gives a longer, more descriptive summary. Subheads are rarely used. This use of language is pretty standard for the well stories. Some headlines may be a bit longer, or use a question instead of a statement, but they all do a good job at pulling the reader in. It’s arguably more important for The Atlantic more than other magazines because for these well stories are quite long and take some dedication and time from the reader, so anything to draw the reader in right away (i.e. the head and dek) are necessary. The bylines are simple, just a “By so-and-so” with a photo or art credit below the author.

Captions and pull quotes also have quite consistent use of language across stories and issues. 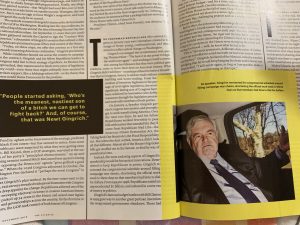 On the left, the example shows a standard pull quote and caption. Captions use straight forward language, meant purely to explain the photo. On the other hand, pull quotes are almost always unattributed and they choose the most attention-grabbing quote possible. I believe the choice to not attribute the quote draws the reader in and makes them want to find out who said that crazy thing.

When it comes to department titles, The Atlantic is fairly straightforward about them, with some exceptions. For example, “The Conversation” is fairly straightforward (reader insights from past issues), but “Dispatches” has a bit more mystery to it, so they give it a subtitle of “Ideas and Provocations” to make it more clear to the reader going into the section. Labels are simple. As the reader goes through the “Dispatches” section, the left page at the top says “Dispatches” while at the top of the right page says the specific sub section, “Politics,” for example. I think the choice to be straightforward and sometimes cheeky with these titles keeps the magazine feeling serious with some airiness so it doesn’t feel too stuffy.

Promos for The Atlantic itself (not paid ads) are few and far between, but they are usually pretty conversational and make someone want to invest in The Atlantic. For example, it may say “One year free!” Exclamation points are rare in this magazine, but for their promos, they are commonplace.