The Atlantic‘s covers tend to be simple – like their inside content, they make good use of white space, usually making for a clean, intelligent looking cover. The the nameplate is always the same size and found at the top of the cover, with the only change between issues being the color. The eye is naturally drawn to the nameplate first, followed by the cover art and the main article featured (which in the case of the middle and right editions in the photo below, fall right beneath the nameplate and have the next largest font). After that, the eye is drawn to the other stories featured in smaller text which are typically found above the nameplate and in the bottom right hand corner. 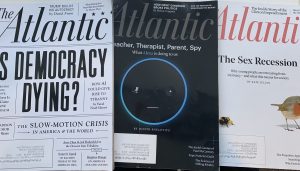 In two of the editions (above, middle and right), six stories are featured on the covers, while the left copy shows nine. Being a more “newsy” type of magazine, that cover resembles a classic newspaper with no art and black type on a white background. But like the other more typical examples, the eye is drawn first to the nameplate and the “Is Democracy Dying” theme. The other two do have art, but each is simple and based on the main story they are highlighting in that issue. Though the three editions illustrated in the above example are quite different in content, their organization keeps the consistency of The Atlantic‘s tone of being a newsy, educated read.

Each edition is between 100 and 120 pages, with pages that tend to be more text-based, although each article does have some sort of accompanying art or photo. Oftentimes, the art is at the top of the first page of the article near the headline, though that is not always the case. Generally, there is minimal art, once again supporting The Atlantic‘s pride in its long form stories and highly educated tone with the priority being on the text. 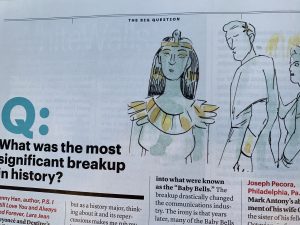 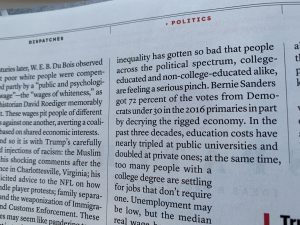 The sections are well marked. As seen above, when it comes to front of book sections, they are clearly labeled at the top in all caps, center aligned, which helps the reader keep track of what section they are in. Regular sections include: Responses & Reverberations (also known as The Conversation); Dispatches (also known as Ideas & Provocations) which includes subsections of Politics, Sketch, Business, and Tech; The Culture File, which includes subsections of The Omnivore, Film, and Books. The next section is the well features, which do not have a marking like the above examples. The back of the book includes the Essay and The Big Question sections.

When it comes to subsections, those are also clearly marked, in the below examples, once again making The Atlantic a well-organized, consistent publication for its readers. Even within the larger section of The Culture File, the reader knows if they are reading The Omnivore subsection or the Books subsection. 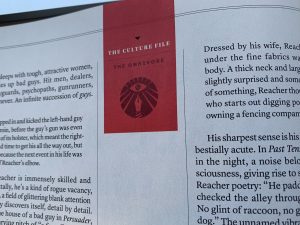 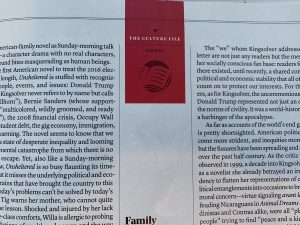