The Atlantic uses various photography and imagery throughout their magazine. While it is text-heavy, I feel that they do a successful job of using some sort of imagery to break up the long pages of text, which varies between photos and illustration, and oftentimes, a combo of the two. 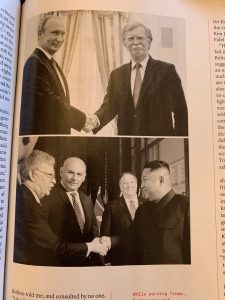 The below right example shows what a standard photo may look like. Photographs are usually more passive, such as posed portraits (photos like this tend to be about as active as they get). While this particular example is black and white (though it looks like sepia), sometimes photos are color. The color scheme of each well article depends heavily on the image’s colors, which makes the design more cohesive and fluid.

On the other hand, The Atlantic also heavily employs illustration and artwork as part of their editorial design. I think this makes 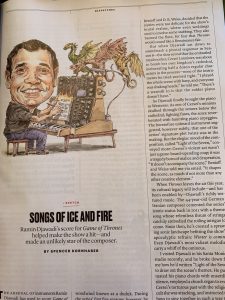 for an engaging magazine and design experience, since many of their articles are on issues that would make capturing photos challenging. It also adds some lightness to the academic air of the magazine, keeping it from being too stodgy. The example on the left is a cartoon that gives this article a bit of a newsy feel, with the class satirical, comic look. Other graphics may be more simplistic, with one color block and more geometric shapes, but they vary throughout, especially for the FOB stories.

Lastly, there is always at least one well story that employs a combination of graphics and photography. 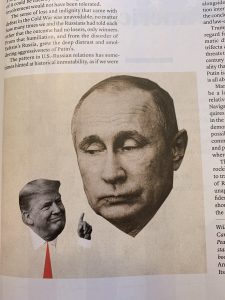 This example on the right uses photos of Trump and Putin’s faces, but adds geometric graphics to fill in Trump’s “body.” This sort of combination of photography and illustration or graphics is common. I think it adds to the playfulness of their articles, and makes  serious topics look approachable physically so that readers want to engage with them.

Overall, The Atlantic has a successful style that allows them to maintain their academic content but somewhat playful graphics, along more serious medium portraits of story subjects.