The Atlantic has a long and proud history of being one of the oldest magazines in America, best known for its long form articles that aim to enlighten readers. I believe knowing some of its history helps when it comes to analyzing its design choices which overall support its mission.

According to their print specs, The Atlantic‘s bleed for a single page is 8.125 inches by 10.75 inches, making it a fairly standard magazine size. While it prides itself on its editorial content, The Atlantic is successful because it also prides itself on being a magazine (and one of the oldest at that), so it makes sense that it fits tradition by being standard with the industry when it comes to size. According to those same print specs, the margins are 0.25 inches, as are the gutters.

The gutter size, while small, helps The Atlantic‘s editorial goals by making the articles look dense. Because of the nature of their content, which are often scholarly or political long form articles, making their content appear tight doesn’t allow the eye to wander much. They make smart use of white space when it comes to the article titles and pull quotes, which helps them stand out amidst the dense text. Below, are examples of what a standard article looks like: 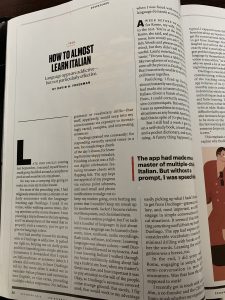 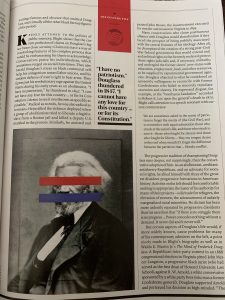 Articles in The Atlantic tend to either have a five- or six-column grid. The above left example shows a standard six-column grid, while the above right example represents a five-column grid. Both examples are representative, as well, of the amount of white space present in each article, though some of the well features have more, such as the below example, making the pull quote really stand out amidst the article: 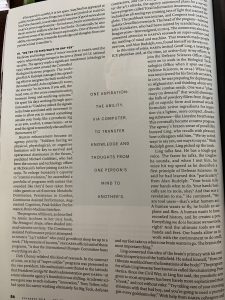 Overall, all of their articles tend to be lengthy, with front of book articles averaging two to five pages and well features being up to 10 or 12 pages in length. Both types have similar amounts of white space and uniform grids across the issues. It adds consistency and makes their long form articles fit tightly on the pages, maintaining the academic, intelligent feel of The Atlantic and not allowing the eye to wander. The only downside is with so much text and minimal white space, the articles can appear too long and dense and, thus, overwhelming.