Format: The Atlantic is a monthly magazine that runs 7’’ x 10’’ in dimension and has an average of 110 pages. The magazine publishes content centered around “politics, business, technology, entertainment, and culture” to “stir vital national conversations.” The page count serves its purpose of stirring conversation, as it allows room for in-depth articles and op-eds. Its dimensions make it small enough to carry to and from work in a briefcase or purse, and even more importantly, it is a proper width for reading purposes. Even at two columns, the columns are not too wide to skim. A wider magazine might overwhelm the reader with too many columns or be hard to read with too wide of columns. I believe the choice in frequency is due to The Atlantic’s in-depth content, as well. A more frequent magazine could result in less detailed or provoking material. For these reasons, I think their format choices are both appropriate and successful. 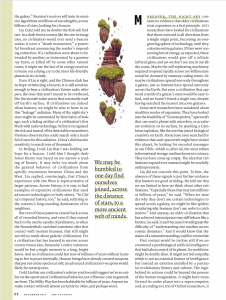 Grid: The margin on all four sides is 3 picas (½’’) and the width of the gutters is 1 pica. Column count varies throughout the publication, but most often, content is placed into three columns. The middle column is often used for a pull quote and/or small illustration (Fig.1) and helps break up the page well. The Atlantic varies its column width depending on the content. In the article, “The End of Chitchat,” there are 3 columns per page (Fig.2). The article’s tone is not too serious, accompanied by a few illustrations of the same nature. In contrast, the more serious stories on Pence and Putin are both two columns wide (Fig. 3), giving them a bit more room to breathe, which tends to give the reader a sense that these stories will be longer reads.

Most of The Atlantic’s content is long articles. The small margins at only ½” don’t seem large enough for adequate thumb space or breathability. With so much text on many of the pages, a tiny bit more margin space would allow the page more breathing room which could help keep the reader from feeling inundated by text. Sometimes, illustrations are placed within the margins (Fig. 4), which is another reason the margins may be feel a bit too small.

The gutter width also feels narrow to me, partially because of the lines that The Atlantic occasionally uses to separate columns (Fig. 5). I’m not sure how necessary these lines are in the gutters. To my eye, they contradict the purpose of the gutter’s white space.

Layout and white space: The Atlantic has a wide range of topics and content, which makes the layout of each spread and even each page, very different. The longer stories can have anywhere from 4 to 10 photos, but stories average around 7. Typically, all photos in a story following the main spread will be wrapped around the body copy (Fig. 7), but occasionally, photos will be placed on their own page (Fig. 8) or collaged with a few others on a separate page (Fig. 9). The longer stories usually take up around 14 pages, and shorter ones only take up 5 to 6. 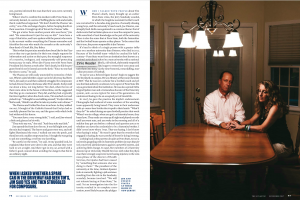 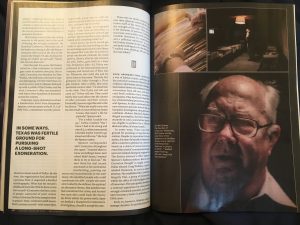 The Atlantic uses graphics as a layout choice in many of their feature stories. In the story, “The Making of an American Nazi,” the designer has used a thick red line to represent a Swastika (Fig. 10). This works not only because it is helping to tell the story at a glance, but it leads the reader’s eye to the next page.

Some layout choices don’t work as well, though. In the story, “Pioneers of a Forgotten Future,” it seems that the designer is playing off of the “Futuristic” theme, but employs too many of these layout tools at once (Fig. 11). The photo breaking grid, the weight of the horizontal line, the color gradient, and the white space around the drop cap all appear to be fighting for attention. Though it caught my eye, I’m not sure where to look first. 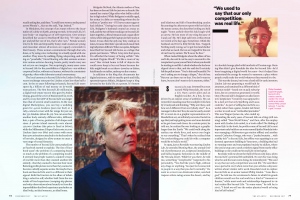 White space is used commonly in The Atlantic to draw out pull quotes (Fig. 12), but it is also used to call attention to a more serious story, like “The Death at Penn State” (Fig. 13). This story gets much more white space than others in the magazine, and photos are emphasized through the white space (Fig. 14).

But a story about a child’s first robot can be much more playful and need less white space (Fig. 15). In fact, the lack of white space here works because it reminds me of the busy mind of a child and helps tell the story. 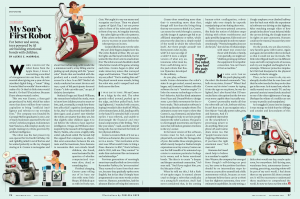