Though The Atlantic uses a mix of both serif and sans-serif typefaces, serif is used more commonly and prominently throughout the magazine. This choice helps to convey The Atlantic as more of a “newsy” and informative magazine.

The Atlantic underwent a redesign in 2013, and many of the current typefaces haven’t been researched when I was looking into the typography. The logo was redesigned in 2013, and is a custom font based on Bauer Bodoni (according to The Atlantic). 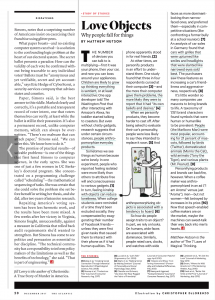 Inside, Lyon Display is the typeface used for section headers and headlines. Lyon Text is used for most body copy, but some body copy is in Proxima Nova (Figure 1). In the “Dispatches” section, body copy is alternated between serif and sans-serif so that the reader knows they are now reading a different article, even if still on the same page. I’m not sure how useful this is for the reader since the red box ends the previous story and the section label and headline clearly mark a new story.

A custom sans-serif typeface has been developed for section labels and is used for bylines, cutlines, and section subheadings (mainly in all caps). Rajdhani is what is used online for these purposes, and is very similar. Pull quotes stories (that are not features) can vary in typeface, but tend to be the custom sans-serif (Rajdhani-esque) or Lyon Display.

In feature stories, designers at The Atlantic use Lyon Display, Neutral Std, or custom typography. Feature story bylines can be in Titling Gothic Fb or Neutral Std or even a custom font. 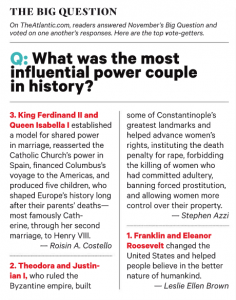 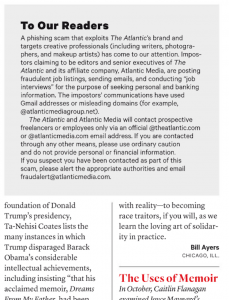 As far as patterns of use, the sans-serif font is used as a contrast to the bigger, bolder serif, drawing attention to lighter topics (Figure 2). It also acts to signal that the content may not be an article or story, but a tip or piece of information (Figure 3).

Name: The name, The Atlantic, conveys to me a sense that this magazine may be primarily about the United States (across the Atlantic). It feels regal and sets a serious tone, which I believe to be successful considering the news-driven conversational nature of the magazine. 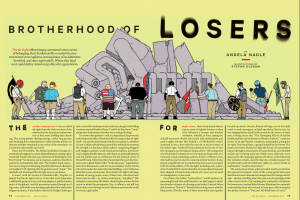 Headlines: The headlines are mostly short and to the point. One reads: “Love Objects” with the subheading: “Why people fall for things.” “What Happens if China Makes First Contact?” was the longest headline I read, and it felt out of place in the magazine. It is still straightforward, just like most of the others, with enough explanation at first glance. Most news articles have decks, while only some feature stories have them. Some decks lead into the headline while others come after. Many feature stories have summaries, as many of these issues are complex and the headline cannot always describe the story (Figure 4). For example, Figure 4’s headline is Brotherhood of Losers. There is no deck, as a summary is more necessary to describe the brotherhood of alt-right men. The tone, more often than not, is serious. The occasional Dispatch article like “Love Objects,” is the exception. 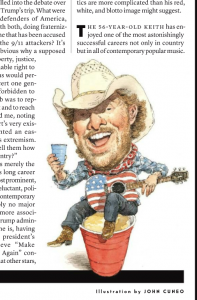 Pull Quotes: Pull quotes are used often. These pull-quotes usually are not “flirtatious”. An exception would be in a less serious story about art, like the Mona Lisa feature. The pull quotes often help tell the story at a glance and never include attribution.

Cutlines and captions: Cutlines are always located in the folio. The cutlines are short and do not include the photographer or illustrator’s title, only their name (Figure 5). In feature articles, photos will be accompanied by a caption, which is usually one to two short sentences. The location and design of the caption differs with the design of the feature story (Figures 6 and 7). 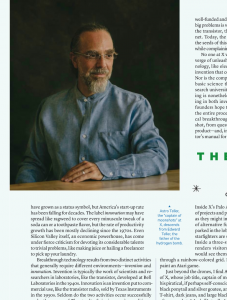 Figure 7 – Caption Beneath with Icon

Labels: The Atlantic uses labels to break their “Dispatches” section down into further sections such as Politics, Sketch, Big In…, and Business. Some titles are little more cheeky than other parts of the magazine, such as “Sketch” and “Big In…,” where The Atlantic describes something that is Big In…France (for example).

Bylines and credit lines: Bylines read: “By Author X,” all in the same weight. The position of the writer is not mentioned. The bylines do differ from the cutlines, as the cutline for illustrations or photos have “Illustration by” in lowercase and the name in all caps. It is unclear to me why The Atlantic made this choice, and I am not sure there is a reason for author and artist credit to differ in design.

Promos and refers: Promos are not used outside of the Cover and Table of Contents, where they are short and newsy.

Overall, The Atlantic is newsy and straightforward, but they do use language to add a bit of character to their mostly serious magazine through unconventional section names and headlines.