Nameplate : Also known as a flag. The newspaper’s name.
Expresso (The nameplate of this newspaper) can be seen very easily to the reader due to it’s graphically treated design. It uses a reverse element ( White words on a dark background) to create an intriguing contrast to the front page. The name “Expresso” is shown in large white text, boxed off by a dark rectangular element. It is one of the first things the reader sees when looking at the newspaper. 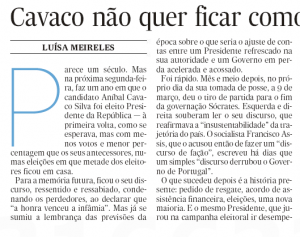 Drop caps: (Initial) Large capital letter set into opening of text
The Large light blue “P” that starts off the first sentence of the article is known as a drop cap. I like the designers use of using a color to portray to drop cap so it stands out amongst the white background and the blue text. It is also interesting how the designer chose to use a very narrow stroke with a very simple sans serif font to portray the drop cap. Although very simple, it works because it creates a great contrast to the large white spaces around it. Being very simple, it sticks out against the crowded text. This drop cap font and color is used on all of the drop caps throughout the newspaper. 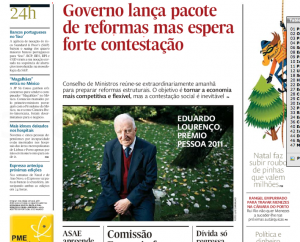 Rules: Horizontal or vertical lines used to separate stories or add contrast. Rules can also be borders, graphs/charts and can be used to create boxes or photo borders. A hairline rule is the thinnest line available
In this instance, the designer uses rules to separate stories, as well as photos from stories. The most interesting part of the way this designer uses horizontal and vertical lines is the different widths used in different locations on the front page. The upper left hand horizontal rule that sits right above the “24h” is the largest width and creates the most contrast to show that the left hand section of the newspaper is for the teasers. Teasers, or promos, are used to promote the best stories in the paper. The teasers are pushed to the left hand side of the page and sectioned off using rules to separate it from the other stories on the front page. Each teaser within the “teasers” section is also sectioned off by a rule. Something that I did not notice at first, but realized after I have been staring at it for awhile is the width of the rules in the teaser section as they go from top to bottom. Minus the top (most heavy line) rule, the horizontal rules slightly decrease in width from top to bottom. Possibly indicating the stories importance? Regardless, it’s pretty cool. Within the teaser section, each teaser has a headline that is seen in a larger, sans serif text that has a different font than the text below it. It is also highlighted in bold, with the same dark blue color used in several different instances in the newspaper. The rule widths throughout this front page vary, providing an interesting, more intriguing front page to look at – rather than keeping all the widths the same (which is boring!). 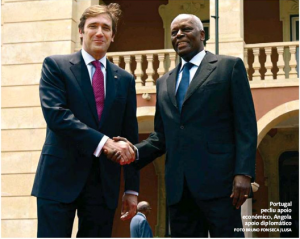 Cutline: (Caption) Info about a photo or illustration
When I think of a cutline, I think of just regular small black text positioned underneath a photo or illustration. This particular cutline is unique because it is positioned within the photo, right-aligned on the bottom right hand side of the photo. It also stands out because of it’s white, bolded text on top of a dark background (reverse?). This is just one of the ways Expresso shows cutlines. Although some cutlines are just the regular, underneath the photo/illustration treatment, most are unique. Other cutlines are positioned in different spots of the photo, while others are boxed off with a special graphic treatment to give them more importance.

Byline: (Credit line) The writers name followed by the important crudentials
Bylines created in Expresso give the writer a kind of special shout-out to make their information more important. Rather than just writing their name along side a story, the designer uses two horizontal rules, one above and one below the byline to section off the text and make it more noticeable and important. I chose this image above as an example to also show the use of a rule to section off an image. I have never seen this type of border before. It is unique because the width of the border changes as your eye circles around the image, making the image more visually pleasing to the viewer. 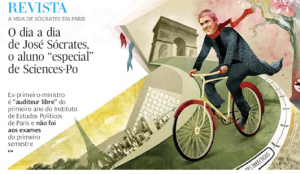 Wraps/Scews: Text indented around a photo or art
The text treatment located at the lower left hand side of the image above is an example of a wrap or a skew. The text has been situated at an angle, and decreases in the number of words per line as your read. I chose this example because the actual illustration has been cropped in a unique way that makes the viewers eye go in different directions and creates a cool white space around the text. 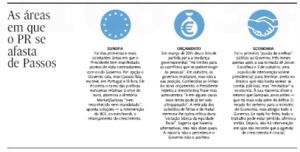 Sidebars: a small story accompanying a bigger story on the same topic – often boxed.
This example of a sidebar above accompanies a full page story. Although I cannot read it, it most likely highlights the importance of the story as a whole or summarizes an important aspect of the article. The text inside this sidebar is sectioned off by a top and bottom horizontal rule (each with a different width – a theme throughout the newspaper that is often repeated). The text inside is very limited and sectioned off in a particular way, making it easy to read for the viewer. The large amount of white space and simple illustrations are inviting to the viewer.

Folio: Located on the inside pages; Line showing the page number, date, papers name ect.
Throughout the Expresso, the folio for the even numbered pages is indicated first with the page number (bolded) and then in smaller text (Not bolded) the name of the issue. Opposite that, in a slightly larger size text is the name of the newspaper followed by the date. The folio for the odd numbered pages is uses the same font, color and size treatments as the even numbered pages, except the information presented is switched.