The format of the magazine is 8″x 11″ which are the standard magazine dimensions. In addition, the publication is weekly and has approximately 70 pages per issue.

As for the layout of the magazine overall, the New Yorker is consistent in being wordy with not too many photos or graphics. When reading the publication, all the words crunched together that tightly can be hard to read at times, or overwhelming to the eyes, but they keep that style consistent throughout the magazine. They use this format probably because they want to fit as much writing as they can into the space provided, using horizontal lines and small graphics to separate stories, which helps the eyes break up the page.

For example, on page 24, the New Yorker uses a cartoon that doesn’t relate to the story on the page, but breaks up the text as the only image on the page, utilizing approximately one-third of the spread. 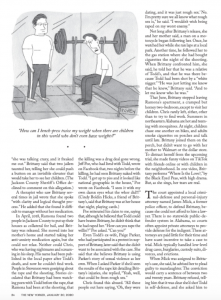 At the start of paragraphs that break the stories up like chapters of a book, there are drop caps, which symbolize a turn in the story or a jump to a new topics within the article. This makes it easy for the reader to differentiate when there’s a change in the story and makes it less confusing to read.

Each page is split into a grid of three columns with small margins, which is probably to best utilize the page space they have. At the beginning of profile stories, the New Yorker uses a half or whole spread with an illustration that typically has a lot of color, at least in this issue, and creates contrast with the black and white text heavy pages.

For the New Yorker, the tight, text-heavy pages work with their brand and they are consistent with their use of illustrations instead of photographs, but perhaps utilizing more white space instead of filling their pages to the brim could appeal to more readers.