The New Yorker uses a few furniture elements in their publication.

Next, the New Yorker breaks up text-heavy pages (which are almost every page) with illustrations and graphics that relate to the theme of the magazine issue or the story that they’re placed in. It helps guide the reader’s eyes through the story and breaks up the text visually to ease readability. 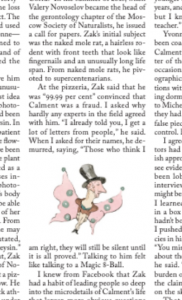 Next, at the bottom of every cartoon in the publication, there are two asterisk-like stars to separate the caption from the rest of the text on the page. The cartoons are a staple of the New Yorker, and the stars make them stand out on the page, creating more white space to make a border. 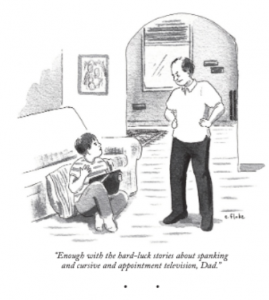 Next, at the top of each section, there are lines that look like they’re hand drawn with a pencil or pen, which matches the illustration-heavy theme of the entire publication. In every issue, the lines are in the same place: above the department headings or to indicate a new section, and sometimes alongside advertisements to create a barricade between the ad and text.

In the front of book in every issue, the Contributors, The Mail, and other sections on the same spread are in exactly the same layout with the same lines indicating the sections, guiding the reader’s eyes and sectioning off the page. 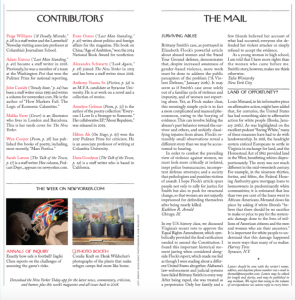 Lastly, in the back of book, there is always the New Yorker cartoon caption contest, with features the previous winner and the new cartoon that needs a caption. The page is always formatted in the same way, and it’s something readers look forward to, as the publication is most known for their cheeky cartoons. 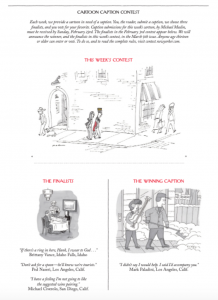 It was honestly difficult to find many elements of furniture in the New Yorker, and maybe that’s because they’re a minimalist magazine that is very text-heavy, or maybe it’s because we haven’t learned exactly what furniture looks like so I don’t know what exactly to look for.