The New Yorker uses Irvin as the typeface for its nameplate, headlines, folios, bylines and department headings throughout every publication. In the table of contents, each department is in Irvin but the rest of the type is in Caslon, which is the body typeface carried throughout the magazine, sometimes in italics and sometimes not, depending on what it’s used for. 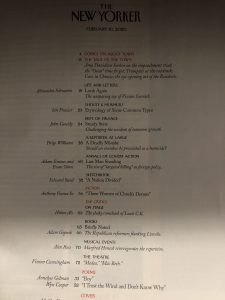 The Irvin typeface reminds me of old-school typefaces, like old New York theater. It works to their advantage, because they cover entertainment like movies, theater, books, etc. as well as various features and politics. It’s uniquely “The New Yorker,” and sets a more eloquent tone to the magazine.

As for language of the magazine, it’s elegant and more affluent than some other magazines, but it’s made specifically for the people of New York – hence the name, “The New Yorker.” It’s also old-school, referring to New York as a “town” in the table of contents, with departments labeled like “Goings on about the Town” and “The Talk of the Town,” which conveys New York as this smaller, niche community of people rather than a cement metropolis.

Inside, there are poems, theater reviews and film critiques amongst feature stories, profiles and political pieces. It uses short headlines, as not to give too much away. For example, in the “Profiles” department, there’s a story titled “Mr. Happiness,” and it includes a four word explanation: “James Corden’s upbeat mission.” It doesn’t tell the reader the details of the article and leaves them wanting to read more. It had me asking, “What’s his mission? Why is he being called Mr. Happiness?” Many of the headlines are the same way, with only two-word headlines and a short sentence descriptor.

The New Yorker also has it’s own voice, in that, it contains cartoons that are funny, but the jokes are more high-class, or are sometimes very niche, but funny to the right audience. They know what their readers think is funny and their famous cartoons are sure to elicit a giggle from their audience. The New Yorker’s readers like reading its text-heavy pages, and are interested in critically acclaimed films and Broadway shows, and the cartoons reflect that.

The New Yorker doesn’t use pull quotes that often, instead, they break up pages with cartoons, illustrations and poems, which adds to the creative nature of the magazine. In addition, the magazine’s headlines and labels are clever and on theme, but they aren’t necessarily cheeky or funny, they just add a level of sophisticated quirkiness to the publication.