Time magazine does a variety of things when it comes to the kinds of images that are used.I will analyze the importance of each section which will include cover, sections and other visual element that is in the publication.

For mostly every cover that is used there is always that dominate element that is going on but each issue is different. For the March 12 issue it has a woman looking away from the camera instead of looking directly at the camera. 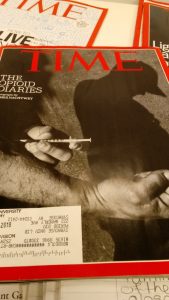 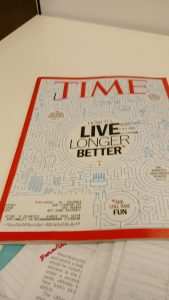 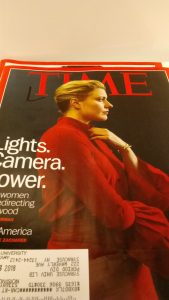 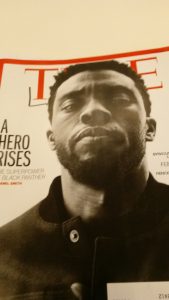 For the February 12, which is a portrait in black and white. In another issues it has a photo of someone injecting themselves with a opoiod. Finally in another issue there is no photo at all, it is a illustration of a maze. The one the thing that three of the covers represent give a sense of authority and it makes me want to pick up and issue. Another thing that I noticed is that when the magazine uses black and white it states that it is an important issue. I think that having a black and white photo on the cover speaks volumes that having it in color. In this case the story about opiod use in America tells a better story in black and white than if it was in color.  Another thing that I noticed about the the colors that are used on the cover seems to complement the red color of the nameplate and the bolder. So I notice that a lot of bright or load colors were not used but more natural colors like March 12 issue. In general based on the theme of the issues the image can be serious like the opoid one or playful like the maze one without taking the qualities that it is still a news magazine.

For the table of contents there is always a photo. The photo is either vertical of horizontal which is usually someone doing some kind of action.

For each section expect for the part where the main stories are located, there is usually a photo that  is included the main story at the bottom. 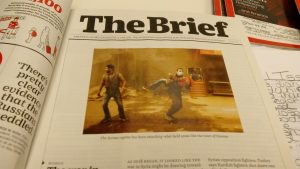 The photos might take up two or three rows across and the outline is located on the outside of the picture. Sometimes section heads don’t have a photos but it can have a illustration or it the photo can take up a whole page like the March issue. For the March 5 issue I think they did to go with the theme of women that are taking over the power in Hollywood. 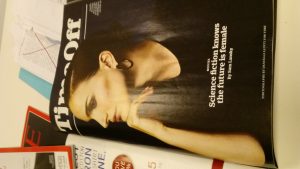 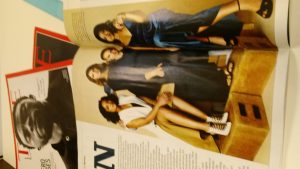 For the main stories TIME does something interesting. In every issue that I looked at I saw a pattern in which the main story had the photo going across each page. 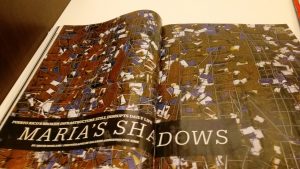 With each story there usually big photos that showed someone doing some action. Some examples that I saw was a man that was standing up and holding up a sign. Another one was the conflict that was going on in Syria. In the issue that was photo essay book about opioid addiction there were a variety of images that were powerful. Some examples could include the police finding someone that overdosed, arresting someone or them helping someone. 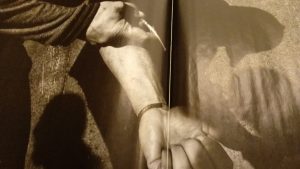 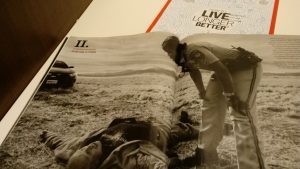 Also in the section people that are talking or being highlighted in several ways. One way is through a cut out, a black and white cut out, a normal portrait photo or just a head in a red or blue box. I think it does that because it used as way to separate the text that is on the page. 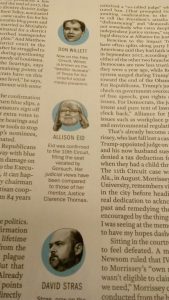 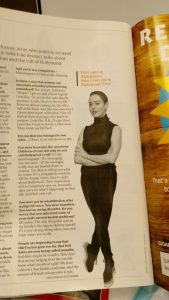 In the publication I think illustrations are used very well. An example would have to be off the record section which includes an illustration of some of the facts instead of having a photo or just number. 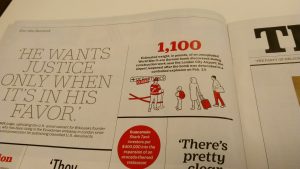 Another example would be in one issue when it used to describe religion as living longer. The could have used a photo with someone praying or going to church but the illustration tells the story just fine. In this case it illustration would have worked because it is going back to the theme of the cover and mood that is trying to be presented. 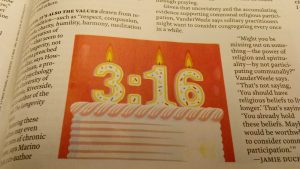 In relation to images there is a pattern in how the images are used in the publication. There seems to be same number of images that are used in the publication. Also in terms of size, large images are used in the broader view  of what image is being shown in the image. Also,all the images have some kind action in what is going and  it makes the photos interesting. Also the publication uses a cool framing tool to make the photo stand out. I think that when a illustration is used I think it used to tell a different visual aspect of a certain topic. In closing I think that TIME does a good job with visuals as a new magazine because readers are going to grab the public based on the image that is used on the cover. n