For TIME magazine it uses a wide range of typefaces. The typefaces that it uses would be typefaces that have a serif at the end of them. The most common typefaces that are used would be Proforma, Franklin Gothic, and Futura. At other times it would mix it up by using Optima or Duplicate Iconic.  For the name plate Proforma is used in bold and it is all in capital letters. 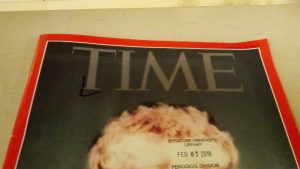 For the table of contents it looks like the same typeface is used but it seems to be smaller and used in gray to separate each section.  For each section or department head Franklin Gothic is used in bold to let the reader know that this is a new section and to draw attention to the page. Finally for the body copy Futura is used. 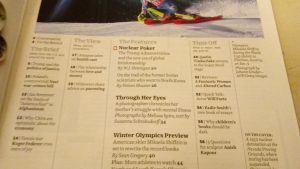 This publication has so many typefaces that at times it gets confusing in which typeface is being used.  I believe they do this to separate content that would catch the readers attention. Also I think that the publication does this to make use of the white space. Like for example for each department head, the text is in Franklin Gothic but the pull quote from a story in that section is in the font that was used on the cover. 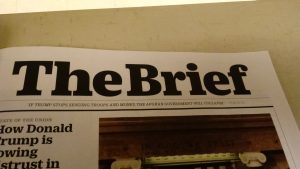 Also for cutlines the publication would have Futura in a italicized text to show something different and to make it stand out. 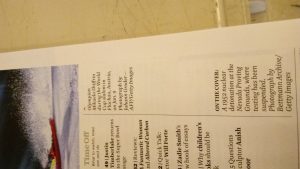 The other thing that I noticed was that for each section head like for example in The View it has the word business in gray text with the same typeface that was used in on the cover and kind of plays with the organization and the layout of the pages that follow. One thing to note is that each byline of the author is red unless the story is part of the entertainment section when the writers byline is a magenta color. 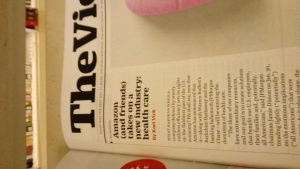 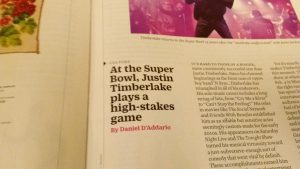 Finally for the three main stories in the publication they would use many different fonts as the main headline for each story but each story has the same typeface. 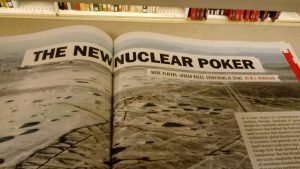 For example in the current issue, for story one it used a bold Optima typeface while the the body of the story uses Futura. The other two stories use the same as the first but the weight of the typeface is turned down for the headline but the body text is futura. In summarizing typography, the publication uses a typeface that kind of have a serious tone but it does says that this is  a news magazine.Also the pattern of Proforma, Franklin Gothic and Futura seems to have the same pattern with each issue because it is consistent. Finally the publication does a good job by staying simple by thinking to hard while presenting it’s self as a news magazine.

The language of the magazine is the reason why I like to read the magazine when I get a chance. The title for example is unique because when someone thinks about news they think about how timely it is and that the time is now to get your news. Yes this has been very successful because no other publication has pulled off what Time has done in relation to having a news magazine. For the headline most of them go across the page and are usually located above the subhead of each section. In describing the headlines they are usually long and sub heads are like five words or less. Time does two clever thing with it’s pull quotes. It has on located on under the section head and they them strategically placed within the article. For example in the most recent issue it has a pull quote placed in between the article to make use of the white space and to add some kind of flow to the content. 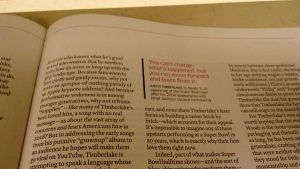 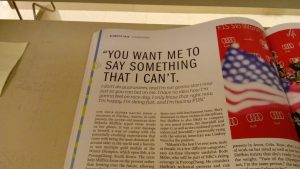 For cutlines like I stated before it uses italics for each one and they are usually placed inside the image in a corner, under the head of the person or directly under an image. Sometimes they give credit but at other times it is not given. Also like I said before each byline has the a authors name in different color based on the section but the one thing that I noticed was that it does not list what the writer of the story is.  Most publications would have the name and for example staff or contributing writer. This probably means that they treat all of their writers the same as everyone else. I am not sure about promos but with the section heads they are simple and basic but straightforward. I say that because to be honest no one is not going to read a publication if the general audience does not understand the content in the publication. How does this all relate to language it is very simple? They have made things short but they are trying to relate to common people. They use language that is easy to read even though it is news magazine, they make it very creative  in sections that are not related to the news. Based on the language that is used TIME magazine has become very successful magazine.