After considerate searching through media kits, the physical publication itself and their website, I sadly regret to admit that I was unable to identity the typefaces used for the print issue. Seeing as they have just recently rebranded, a majority of what is available online is from past issues and was published before the redesign occurred. With that said, Cooking Light thoughtfully uses extremely similar typefaces, downloaded from google fonts, on their website in order to keep a consistent visual style and mood across all of their platforms. Considering the nameplate is a charming modern serif, similar to Playfair Display, a majority of the text, not including the body copy, is set in various kinds of san serifs. Cover lines are always displayed in a sans serif similar to Montserrat and Raleway, using various weights and sizes to denote hierarchy. With that said, some individual components, such as a number, might be set in the same typeface as the nameplate to provide a little extra emphasis on that article. Headlines are always set in the same typeface used for the cover lines, in either medium, bold, or extrabold. Additionally, they are always left aligned and consistently triple the size, if not larger, than the remaining text on the page. This treatment not only gives the sections a sense of authority, due to the size and boldness of the type, but also works to provide the modern feel 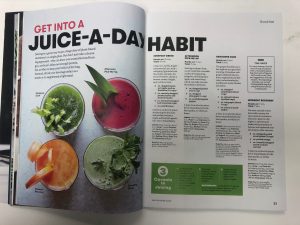 Cooking Light is working to emulate post rebrand. Headers, which are used to denote the section, are surprisingly larger than the body copy, but only by a few points. The typeface they use, which is reminiscent of Comfortaa, has an open and inviting feel, never overpowering the remaining text on the page, even tho it is technically larger. The subheads are always set in all caps, using the same extrabold typeface denoted for the headlines. While they may be consistently smaller than the headers, their bold styling catches readers attention, helping to elevate their position in the overarching page hierarchy. Footers are also utilized to denote page number, magazine name, and issue theme. The magazine name and issue theme are always set in all caps, sized at no more than 8 or 9 pts. and set in the regular or light weight of the same sans serif used for the headlines and cover lines. The page numbers are distinguished by their size, which is a few points larger than the rest of the footer content, and their typeface, which is the same as the nameplate’s. Lastly, the body copy, as well as the deks, are set in a serif reminiscent of Merriweather but  a heightened sense of sophistication and comfort. This choice not only allows for an extremely pleasing visual contrast between all heads/subheads and the deks/body copy but it also works to reaffirm that Cooking Light is a source of authority for classic home cooking while simultaneously providing a sense of ease and comfortability, which is not accomplished by the sans serif alone. Collectively, each type choice and treatment work to create a magazine that is not only visually appealing, but alludes to a modern and fresh twist on our favorite classic meals, which is exactly what Cooking Light delivers each issue.