The major textual content of the magazine is food and drink recipes. Thus, the magazine makes a very informed decision by choosing very clean and clear typography so that the steps can be easily read. They also showcase more than two recipes on a single page keeping the layout and placement of the text neat and easy for the reader to follow through.

The nameplate is a serif typeface, while the rest of the textual content is mostly san serif. The typefaces complement each other well, making it distinct yet coherent. The typeface used for the headlines, taglines, and labels is Futura with different typographic weights depending on whether it is the name of a section department of a tagline. Futura as a typeface is very geometric and versatile in font style and weights. This versatility allows the typeface to be used at multiple textual positions and hierarchy. The magazine very consciously does not repeat the typeface used for the nameplate on the cover page, unless if the nameplate is repeated inside the magazine on the TOC/Editor’s Note/the credits page.

The section department names are approximately 3” in height and the taglines and punchlines are made relative to the size of the section department names. The magazine cleverly plays with text heights even though the same typographic weight is given to each textual element on that specific page. This is something I am also trying out for my magazine prototype to create a hierarchy. Primarily, the major typeface used throughout the magazine is a san serif one to give it a clean minimalistic aesthetic to the entire issue.

Along with typographic weights and styling, “color” is used as a tool to distinguish one subtitle from the other or even two taglines. Throughout the magazine, a color scheme is used which is in close correspondence to the colors on the cover page. This translates the essence of that issue.

The typographic guidelines that I could interpret are the following:

I also think Futura as a typeface is geometric but precise at the same time, rigid but the variety of font styles to it provides an opportunity for the designers to use it repeatedly with multiple weights and styling. While the repetition of the typeface makes the issue’s look uniform the different styling prevents it from looking too boring as well. 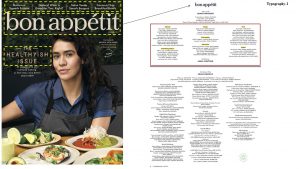 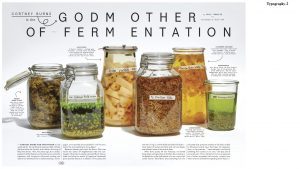 Concluding, I think the overall typography in the magazine is an aesthetic idea about modernity–clean lines because the images and illustrations are so powerful. The typography gives a sense of efficiency and is contemporary just as the issue topics/themes of the magazine.