Fast Company uses a variety of serif and san serif fonts. For the section fronts, the magazine uses more decorative font, as depicted below:

According to Fonts in Use, Fast Company uses Meret Pro, Kaiser and Zizou sans/slab. Examples of Kaiser and Zizou Sans are shown below (via Typedeck).  Two important characteristics of these fonts are that they come in many different weights and are made to be stacked.

These fonts are often use in the same layout to establish hierarchy. 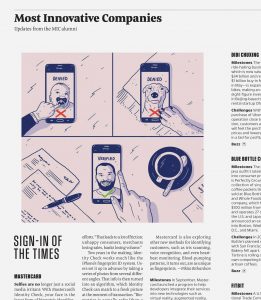 “The Most Innovative Companies” headline is displayed in Meret Pro, which is a straight-forward, newspaper-esque font. All of the fonts together give Fast Company a modern look. The fonts are used interchangeably for headlines, bylines, headings, pull quotes, etc.

The title of Fast Company is modern and conveys a sense of urgency. The magazine’s headlines are usually short and to the point. For instance: “Stella’s Focus on the Future,” or “Kevin Durant’s Next Play.” I think this plays well with the magazine’s title word “fast” as readers are able to skim the TOC and the sections and quickly know what the story is about. The headlines are often inquisitive, urging the reader to think about a certain scenario. For example, “Can Netflix Slay the Mouse?” (shown below). 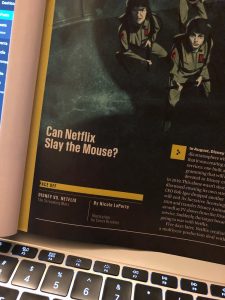 Pull quotes are used and they are made more prominent due to the extra white space around them. Pull quotes are sometimes attributed and range from being informative to inquisitive and playful. 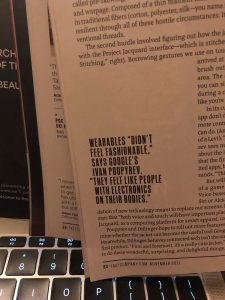 Cutlines are often placed inside the picture frame or in the bottom corner of the page, as show below. The tone and style of cutlines is short and informative. 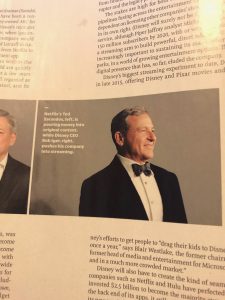 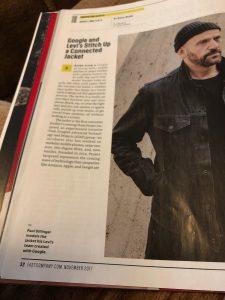 Promos are also short and to the point. Fast Company does not promote other content on their sections fronts–just the first story in the section. The departments consist of: From the Editor, Most Creative People, Most Innovative Companies, The Recommender and The List. The have other sections depending on the issue (i.e. if its a special report). Feature titles are also short, rarely stretching past 1-2 lines. Overall, Fast Company is a very straight-forward, no-nonsense business magazine and that is expressed in the typography and language that it uses.