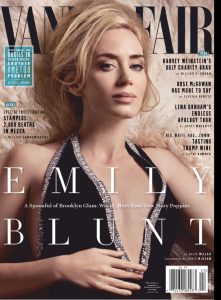 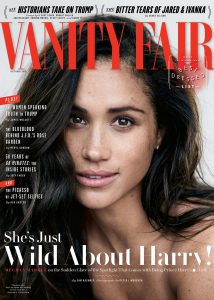 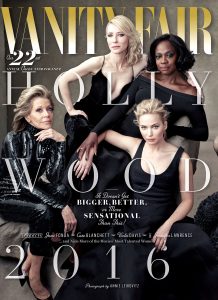 Function/ Purpose: The cover photos of Vanity Fair highlights the most important story in that issue. Usually, the cover is a celebrity’s photo taken by the magazine. People love talking about the cover photo of VF because VF usually knows how to take beautiful, elegant portraits. Sometimes, when there are a big Hollywood events is ongoing such as The Acadamy Awards, VF will produce an issue with all the nominees on that cover. We live in a popular culture era, people are familiar with the celebrities. Putting celebrity’s portrait as a cover serves a good purpose of attracting people’s eyes.

Type of Images: Like I mentioned above, the type of images VF chose is mostly portraits. VF is famous for producing celebrity’s portraits also, like Oscar winner’s photos are always topic generator labeled by VF.

Inside Stories: The most highlighted feature story of the issue is the one the cover photo about. The story taglines are put somewhere most conspicuous on the cover, meanwhile, there are about 3-5 feature stories’ taglines placed on both sides of the cover.

Hierarchy: The magazine prioritized the stories by the text sizes and weight. The main stories are in a different font and color compared to the inside stories. The feature story represented the cover photo is usually put in the middle.

Consistency: The font and size of the nameplate are the number one consistent symbol of VF. Besides, the style of the portraits is also remained the same issue to issue.

Tone/Attitude: To maintain VF has the sense of high fashion, you can seldom find a laughing or smiling portrait on its cover. 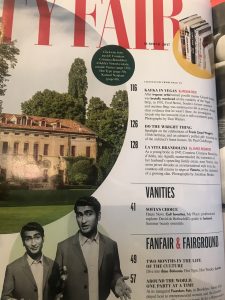 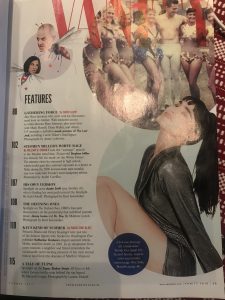 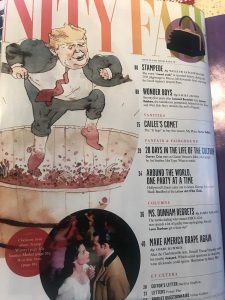 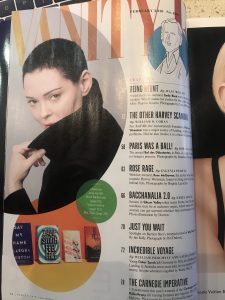 The table of contents of VF is separated into two pages, even though there are a bunch of ads between the two pages the table of contents actually look pretty consistent due to the styles of both pages and the title — Vanity Fair is spread out on each page. The page numbers and the titles of each feature story or column story take 1/3 of the page on the right. The left 2/3 part of the page contains the pictures and quotes of the most interesting stories to catch readers’ attention.

You can find “Features”, “Vanities”, “Fanfair & Fairground” and “Columns” on each issue. For me, it’s not very easy to differentiate each section. But for a regular reader, should know that the columns are the first two stories, and features usually have large opening spreads and jump spreads.