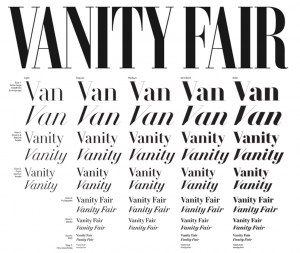 Typography choosing is a really difficult part of designing a magazine. 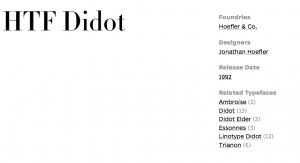 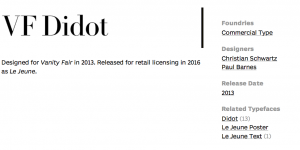 Vanity Fair has its own fonts San Serif or Serif.

When I searched on Google about the typefaces of Vanity Fair, an interesting article popped-up. In 2011- 2013, Vanity Fair made a large change. The design director Chris Dixon refreshed the whole look of the magazine.  Rather than a top-to-bottom redesign, this has been a gradual improvement focused on keeping the basic visual DNA of the magazine intact. He replaced the title has been using for nearly 20 years. After nearly a year-long design process, VF Didot, designed by Paul Barnes and Christian Schwartz. The change of the font is not dramatic, but a subtle one. The new typeface didn’t just need to have high contrast; it needed to be recognizable as a Didot, not a modern style one. They enlarged the x-height, which makes the typeface feel fresher and less like a purely historical artifact.

Other than the traditional Vanity Fair font, this is another Vanity Fair nameplate in VF Sans. It creates a more modern and neat look of the name.

Here’s a detailed explanation displaying all the different fonts the magazine uses on the cover page.

Didot. It is for all intents and purposes Vanity Fair’s signature font and is used almost exclusively on the cover and most of the pages of the magazine. This font evokes an elegant and classic tone.

VF Sans. It has five weights, two widths, and was created for Vanity Fair by David Harris (design director) and Greg Mastrianni (art director) and designed, drawn and produced by James Montalbano of Terminal Design. This font is mostly found in captions and articles, giving readers a tone of modern edge.

Solano. Designed by Mark van Bronkhorst between 2007 and 2009. This typeface is a latest-added typeface to Vanity Fair’s design library. It is used mostly with a wide tracking and in a smaller point size which does not tone down its importance.

NAME – Vanity Fair, as the name showcased the magazine is mostly about Hollywood fashions and celebrities’ life.

Types and Headlines – The headlines used in VF are quite hammered. Not long, but concise and smart.

Pull Quotes – Pull quotes in VF are usually attributed and emphasize in another typeface to distinguish the pull quotes from usual content.

Cutlines and Captions – The captions of the articles in VF is not long, two to six, seven words. Not a sentence, but attracts readers’ eyes.