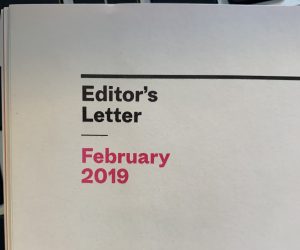 Here, we have the top of the Editor’s Letter page. The title is tucked between a thick line that extends across the full length of the page and a short, thin line that separates it from the date listed below in pink. This same format is seen on the Table of Contents page, as well as the Proust Questionaire page found regularly on the last page of the magazine. This format is used for standalone sections of the magazine that appear in every issue. It also indicates the tone of the sections (FoB and BoB), which are younger, punchier, more playful. The san serif type and use of color (aside from red, VF’s signature color), help establish this tone. 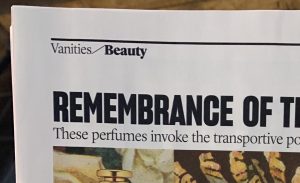 The line motif is seen throughout the magazine, although namely in the front of the book. The front of the book section, Vanities is indicated by the line that runs across the top of the page, with “vanities/___” below it to signify the topic of the page set in bold. The line continues into the subsequent FoB pages, although now it isn’t part of the Vanities section. We are made aware of this by the change in format. Smaller articles found in the FoB adopt the line but set the title of the article in bold, capital letters with the byline below in italics, making the transition smooth but distinctive. 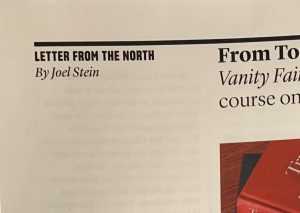 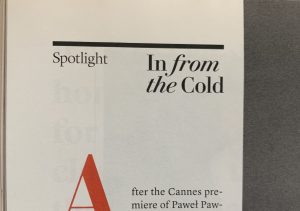 Although the top line is used to indicate the FoB sections, it is seen again in the midst of the feature well for the spotlight stories. The Spotlight stories are shorter pieces tucked between the longer feature stories, and are treated similarly to the short FoB articles. It includes the section title and story headline. A critical distinction between the formats is that the Spotlight stories, found in the feature well, share a similar format but use more serif type, less color and bigger font sizes. This transition from san serif and color to more serif and less color can be identified from the beginning of the magazine’s FoB to its feature well. The feature well has longer stories with serious reporting and subject matter, and the serif typefaces match this tone. 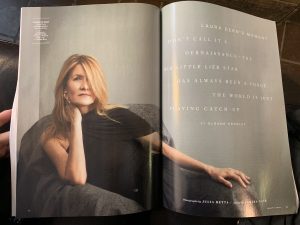 VF has some of the best photographers at its disposal and their photos are given as much attention as they deserve, with most cover spreads including full-bleed images. The feature well doesn’t have a section page but instead uses its diversely designed full-bleed spreads to indicate a new department. As seen in an earlier example, the bylines are typically set in italics, while the contributors’ names are set in bold, capital letters to contrast the information/emphasize the (more important) names. The folio is always found at the bottom of the page, usually on both side, and includes the page number and nameplate on the outer sides of the spread, and the issue date on its inner corners. 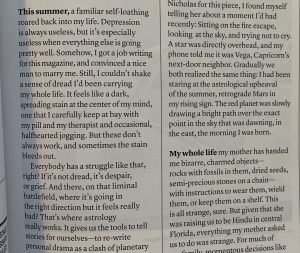 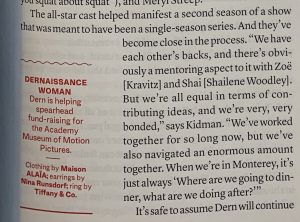 Since VF features are usually longform journalism pieces, they are often text-heavy and require visual breaks to help the reader along. Lines are often employed as column dividers to create a clear distinction. Additionally, VF’s signature red is used for drop-caps and captions to reemphasize the VF brand and to create visual contrast. Lastly, the first words of paragraphs are intermittently bolded. This looks like a subheading but only acts as one in that it helps the reader break down the information in chunks, even if there isn’t a change in topic. The visual break makes the reader feel less overwhelmed by all of the text. 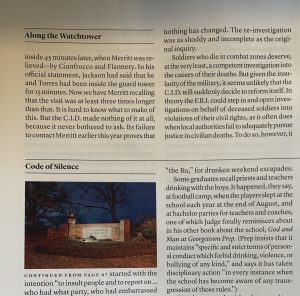 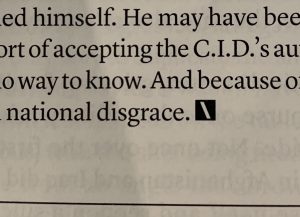 In the back of the magazine is the continuation of the longer stories that couldn’t all fit within the body of the magazine’s sections. This section is minimally designed, and while it might include a little photo here and there, it’s mainly just body copy. Each story is set apart from the next by setting the headline between two thin lines. If that wasn’t enough, VF includes a stylized “V” to end each of these story continuations. It isn’t distracting but almost looks like literal branding, reinforcing the brand identity on pages that lack design.