Vanity Fair is a cultural magazine known for its Hollywood glamour aesthetic and voice, evident in both its photography and journalism. While the magazine tackles serious stories that go beyond the topics of Hollywood, celebrity and scandal, the language of its content reflects the whimsical personality of the brand. 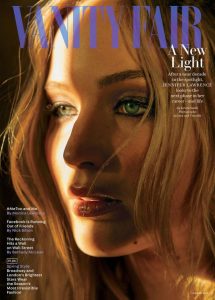 Historically a society magazine, Vanity Fair was born out of the jazz age during the 1920s. Its name perfectly encapsulates the atmosphere of the era it was established in, defined as “a scene or place characterized by frivolity and ostentation.” You can think of the brand identity of the magazine as a formula consisting of a bit of celebrity and a bit of scandal with a literary flare.

The copy seen on VF covers are well-crafted and thoughtful, often using a play on words. Vanity Fair’s March 2018 issue features a cover photo of Jennifer Lawrence with a light streak across her eye. It is accompanied by the coverline: “A New Light: after a near decade in the spotlight, Jennifer Lawrence looks to the next phase in her career – and life.” The copy makes reference to and takes shape around the imagery of the photo, where Lawrence is literally looking into the light. The smaller coverlines include “#MeToo and me,” “Facebook is running out of friends,” and “The reckoning hits a wall on Wall Street.” The play on words is an effective way to produce creative copy that also plays into VF’s whimsical, literary tone.

Many headlines include superlatives that hold similar tones. For instance, “Spring Style: Broadway and London’s Brightest Stars Wear the Season’s Most Irresistible Fashion.” This language entices the reader, while the time element that “spring” and “season” represent bring a sense of immediacy to the reader’s attention. A cover story featuring Emma Stone includes the pull quote: “It’s really rewarding, and all those adjectives, to do something heartbreaking,” says Stone of her film The Help, out this month.” The quote is suggestive, alluding to the movie, but provocative and unexplained enough to draw the reader in. 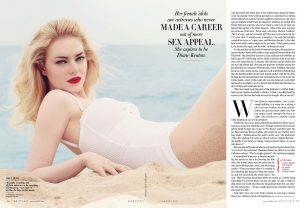 Bylines and cutlines are uninventive, getting straight to the point with a simple “by [author/photographer/designer]” format. Labels, on the other hand, are rather cheeky, with examples of “Meet-Cute” to introduce an actress’ quote, and “Let There Be Light” to introduce a scandal surrounding Julian Assange. The labels have a similar structure as the headlines, speaking to the content but not too explanatory.

The promos found in the Front of the Book sections are trendy and conversational in tone, evoking a gossipy voice that speaks directly to the readers. The body of the longer articles found in the feature well are typically more formal and centered around the literary aspect of the magazine, with endless detail and extravagant imagery that often feels nostalgic.  Section names like Vanities and Fairgrounds are informative of the department’s content, and directly related to the magazine’s name. They produce a sense of continuity as well as playfulness.