Generally speaking, the content of the images throughout are primarily of people and sometimes of events and most of the images are wide or medium shots. Beyond that, the way those images are styled depends on where they are found within the publication. To analyze the images in VF, its important to remember that the DNA of the magazine involves a combination of high and low culture. This is translated throughout the magazine’s visual and editorial content, but is more apparent in some sections than in others. 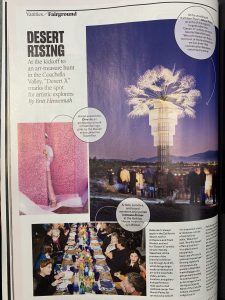 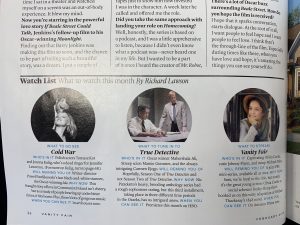 The FoB takes on the tabloid-y half of the brand, with a clutter of celebrity candids and coverage of high-end products and exclusive events. While almost all of the photos are rectangular in shape, the younger, more playful FoB sections occasionally use circular frames. The feature well and the FoB are both image-heavy but the FoB pages typically include multiple images per spread that are smaller in size and more colorful than those found in the feature well. 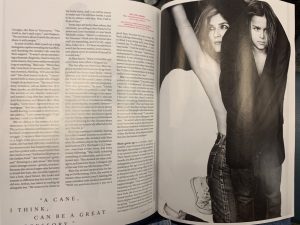 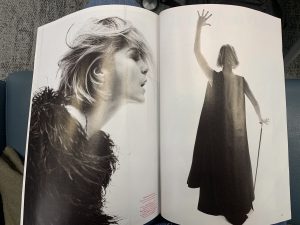 On the other hand, the feature well lends itself to the high-culture half of the brand defined by Old Hollywood glamour and an appreciation for things of retired tradition and time. This section includes all of the award-winning photography by renowned photographers, like Annie Leibovitz, that VF is known for. The layout of the feature well is interesting in that the pages are usually either entirely text or image. A single image typically consumes either a half spread or a full spread, adjacent to but separate from the text, so that both the words and photos receive the attention they independently deserve. Of the February 2019 issue’s 10-page cover story, six are composed of 4 images. The effect of this is also to produce “one big visual experience” for the reader, according to VF creative director Chris Dixon. The images are either in black-and-white or subdued colors, and feature culturally relevant celebrities clad in silk and lounging on velvet. The subjects are almost always posed, in passive positions that compliment the elegant/sophisticated aspect of the brand. 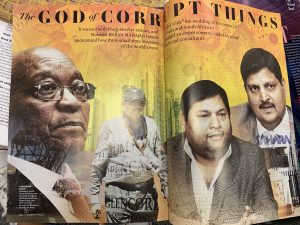 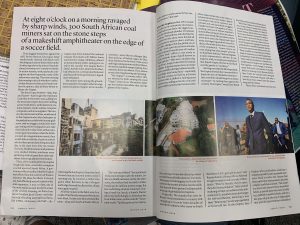 Since the magazine adopted its new editor Radhika Jones in 2017, the feature well has taken on the more playful look found in the magazine’s FoB and BoB sections. Feature well pages that were once much less designed are now including more images per spread with brighter colors and various sizing. VF didn’t even use sidebars or really any visual elements – those fun nuggets of information were traditionally left for the FoB and BoB – outside of full-bleed photos in its feature well until more recent issues, but now we’re beginning to see them appear more frequently.