Vanity Fair is a longstanding American magazine and, according to VF’s Senior Social Media Manager, one of the last great cultural magazines. It’s physical dimensions are roughly 8.3 x 10.7 inches with an average of just over 100 pages. It prints 12 issues annually, combining June and July into one month to make space for a special Hollywood issue. Major award shows that take place in February, like the Oscars and the Grammies, makes February an ideal month for a Hollywood issue, especially when considering VF’s readership and content. Vanity Fair is defined by its combination of high- and low-culture, but is more often recognized for its glamorous aspects. Hollywood and its cult of celebrities are representative of both the cultural arbiters of American society as well as pointless tabloid creatures, making it central to the DNA of Vanity Fair. 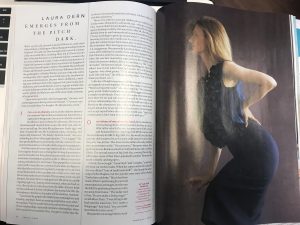 The side margins are consistently 0.5 inches on either side, aside from the occasional image that bleeds off the page. The top and bottom margins are regularly 0.6 inches wide, while the page numbers lie 0.25 inches from the publication’s edges. Along with the margins, Vanity Fair maintains a standard gutter width of 0.25 inches. However, many of the spreads are overtaken by entire photos, enveloping the gutter as well. 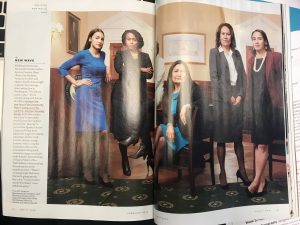 As for the columns, the spacing shows greater variety. The number of columns and their widths are consistent within an article’s spread. The cover story, for instance, consists of 10 pages, with each page containing text broken down into two even columns of 3.4 inches. Some of the shorter, less photo-heavy stories include three columns, with widths of 2.1 inches. The space between columns, regardless of the number or size of columns, is always 0.25 inches. The standard sizes maintain visual uniformity throughout the magazine, while variance in the column numbers allows visual variety between stories. 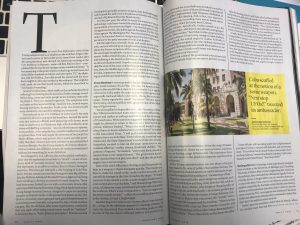 The cover story consists of 10 pages, almost each page solely dedicated to either photo or text with few other breaks in between. The cover stories tend to hold a one to one ratio between photos and text, although several other stories in Vanity Fair also tend to be photo-heavy. The harsh divide between the text and photo, as well as the even ratio, reflects the publication’s distinctions in journalism and photography. This sometimes lends itself to looking crowded, but the separation serves to dedicate deserved attention to both award-winning journalism and prized photography.