For my field notes, I decided to analyze the January/February 2017 issue of The Atlantic. The Atlantic is a monthly magazine, sold at newsstands, bookstores, and convenience stores. After measuring the print issue with a ruler, I came to find that the magazine is  7 7/8” x 10 1/2”. These dimensions work considering the publication’s demographic and great readership size. For example, according to the publication’s 2015 media kit, the median age of a reader is 53. If the dimensions were any bigger, readers would feel discouraged from carrying the issue to and from work. It would serve more as a table magazine, rather than an informative and thought-provoking read. Plus, those dimensions are the most widely recognized within the magazine industry. It’s accessible and caters to a wide demographic. The Atlantic is published 10 times a year, with double issues in January/February and July/August. This works because the publication covers a wide range of topics, such as politics, business, and technology, all of which are grounded in time pegs that pertain to current events and recent policies. The page count in this issue is 100. 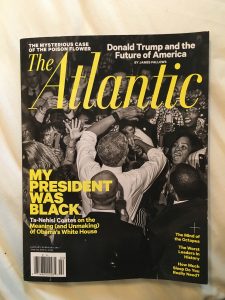 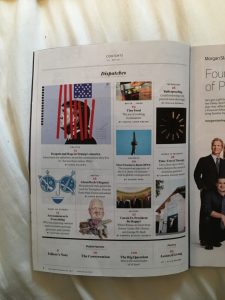 In order to measure the magazine’s grid, I once again used a ruler, and according to my measurements, the margins were .75 inches on top, .75 inches on the bottom, including the folio space, .75 inches on the outside, and 1 inch on the inside. The wider margin on the inside is effective because it grants breathing space for the text. In other words, the content isn’t swallowed up by the spine. If the inside margin was just as wide as the others, the text would be lost in the perfect bound binding. Depending on the story or department, there are either two, three, or four columns on a page. When there are four columns, they are each 1.75 inches. When there are three columns, they are each 2.5 inches. When there are two columns, they are each 3.5 inches. The variation in columns helps to create a visual difference or distinction in each section of the magazine. It cues the reader as to when they progress to a different section of the magazine. The gutters, on the other hand, are a quarter inch. There is also a black rule in the gutter which creates the illusion that the columns are closer together. It fills up the space in between and creates a more cohesive narrative. It’s also important to note that in longer features, such as the cover feature, the bold pull quotes align to the gutter rules, giving readers a break from the dense text. 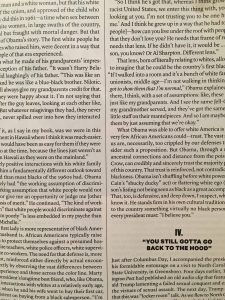 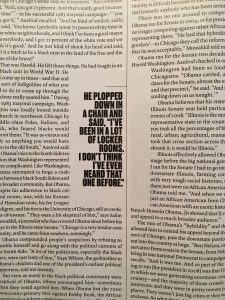 In departments and in features, there is typically just one photo on the page. For some readers, the blocks of heavy text may seem daunting, and so, adding additional images or illustrations per page could help to break the lines of text. Because features are long form pieces, they take up multiple pages. For example, in this issue, the cover feature takes up 20 pages. The next feature, meanwhile, takes up five. Evidently, the more space a story takes up, the more important the editors deem the story and the more time readers will interact with it. 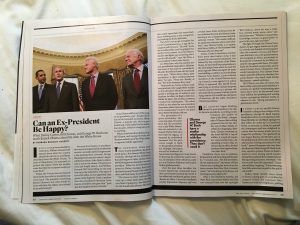 Throughout the front of book features, the columns break along the odd numbers. As a result, there is one small column between the two large columns, and within that small column, the designers introduce some white space around a pull quote. This is particularly effective because it breaks up the pacing of the dense text.