Typography: In The Atlantic, the section or topic name is set at the top of the article. In order to distinguish the different sections and topics within departments, it uses Proxima Nova, a sans serif that is set in red. Still, the type is small so as not to distract from the other copy. The headlines, which convey an authoritative tone, are set in bold Lyon Display. The caption or description underneath, however, is not in bold. Then, again, the byline is set in bold. The byline is also tracked and in all caps.

For body copy, The Atlantic uses Lyon. The drop cap is Proxima Nova in bold. It drops four lines to start. Every section after that, it only drops two lines. This works because it helps to break up the story. For two to three words after the initial drop cap, the words are in small caps and tracked out. It’s important to track out those letters given that caps are read one by one. 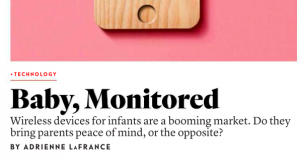 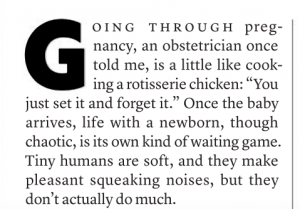 The name of the magazine: The Atlantic, like the Atlantic Ocean, suggests that it covers content with an East Coast perspective, which it does.

Types of headlines used: The headlines are typically two to three words. Because of this, the headlines are seemingly bold, assertive, and commanding. They command the reader’s attention. The deks, below, are winding and offer more detail as to what the story is about.

Pull quotes: Pull quotes are frequently used, especially in longer pieces. They are never attributed because in relation to the other text, they are self-explanatory. 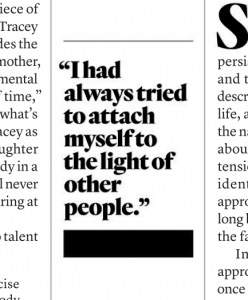 Bylines and credit lines: The writer is given credit with “By William Brennan.” Photographers and illustrators are granted a more specific phraseology that says either “illustration by” or “photography by.” It should also be noted that photo credits and illustration credits are placed either in the bottom of the page or tucked in the inside margin. The credit is rarely tied or closely associated with the actual image.

Sections: The section names, such as “Books” and “History,” are very generic and straightforward.