Fast Company name: Though I couldn’t find exactly how Fast Company got their name, I believe it comes down to what the founders were thinking about in 1995 when they created the publication. According to the Fast Company website, and more specifically their “about” section, told the origin story of the book. The two former Harvard Business Review editors founded Fast Company “on a single premise: A global revolution was changing business, and business was changing the world.” A strong premise indeed. I can imagine that at that time technology was moving at the speed of light (for the 90s) and business practices were adopting technology and utilizing it in ways it had never been used before. So, that leads me to believe that the name Fast Company was based on things moving very fast, and wanting a place to discuss these new innovations and how they were changing the business industry.

Franchises–how they’ve built their brand on them: I think it’s important to take a moment to talk about the franchises that Fast Company currently operates. Because these franchises are what people associate with the brand Fast Company and inspires most of their editorial. These franchises include, “Most Innovative Companies,” “World Changing Ideas, “Innovation By Design,” “Secrets of The Most Productive People,” “Most Creative People” and more.  For many of their franchise issues, Fast Company assesses thousands of businesses to compile a short list of companies, people and more, that it considers the best in whatever category. These lists in turn directly impact their editorial content and gives the magazine a reliable, trustworthy tone, because they’ve gone through all this research and consistently show their audience new leaders, businesses, products and more than stick out for the values that they hold close as a company. After hearing several Fast Company employees speak (when we stopped in during the Glavin trip), including EIC Stephanie Mehta, they emphasized how they have morals that are very much set in stone—and for the people. Mehta spoke about how they wouldn’t put Jeff Bezos back on the cover of Fast Co. firstly because he’s so over-profiled, but also because he’s not really doing anything innovative or new (despite possibly taking over the world). Mehta spoke about wanting to shine a light on people who are perhaps under-represented, or are leading their businesses with a unique, unabashed, never-been done before outlook. Like Whitney Wolfe Herd, who adorns the October 2019 issue of Fast Co. for her company Bumble, and how it’s changing the rules of the dating game. Herd is, for one, a strong female CEO, of which there are few, and is running her company with a strong set of morals that she feels is right. For example, she has banned lewd pictures, pictures with guns, and has made it so women have to make the first move—a power move in it of itself.

Department names: Moving onto department names, their first department is called Next with the subsections: Next: Big Idea, Next: Masterclass, and Next: Data Dive, Next: Creative Conversation, Next: Behind the Brand. They’re short, to the point, and spells out exactly what you’re going to get in each section. Since this is still a FOB section, it’s shorter pieces, but they don’t lack substance. The Next piece that stood out to me the most was the Next: Data dive. Even though it’s a sub-section that provides an in-depth data-driven piece, its fun, and relevant title “Where’s the Beef?”which ties back into popular culture, perhaps trying to relate on some level to a younger audience. And the dek “plant-based alternatives are gaining ground,” throws in a little pun about “plant-based alternatives” that are “gaining ground.” Once again, it tells you exactly what you’re going to be reading about, but they spice it up by using puns and jargon that’s going to make the reader chuckle. One of Fast Co.’s signatures are infographics. They’re everywhere, but it’s because they make it work. They don’t just overwhelm the reader with stats or numbers, they separate the numbers with blurbs about the subject at hand. Which I think is an effective strategy to get people to actually read the whole page and absorb the information. 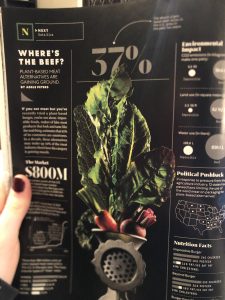 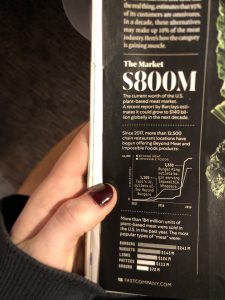 The next department is the The Recommender, once again, you don’t have to think very hard to figure this one out. This is a section for things, people, business ideas, designs etc. that Fast Co. specifically endorses. I think the fact that they fully state that these are the things that they recommend to their audience, who is extremely valuable to any publication, shows that they’re extremely confident in their research and their staff if they’re able to come up with a whole section of things that they think you should invest at least some time into thinking about. In the October 2019 issue, The Recommender includes several products, books, music, ways to live, places to go, Twitter accounts to follow and q&a with someone Fast Co. admires for their business ethic and career path. This is an incredible varied section, and I honestly didn’t realize how many ideas that vary so greatly, are pushed into just four pages. This section reminds me of the spread you were talking about in class that we’ll need to include in our prototype. You were saying how the content can vary, but must have something tying it all together. I think that description perfectly encapsulates what Fast Co. has done with this section. What I like most about it, is that it doesn’t seem like they’re trying to sell you anything. And in fact, most of the things that are spotlighted on these pages, aren’t even available to be purchased. I think it says a lot about Fast Co. that their recommendation section isn’t just high brow products that they’re getting paid to advertise. They’re promoting reading, listening to good music, and eating pop-tarts even though they may not be the healthiest snack. The language and ideas that are promoted in this section aren’t just good for getting ahead in business or buying the best that money can offer. It’s about buying a leather bag that can help its owner make a playlist or locate a missing phone. It’s about being conscious of their readers budget (although many of them are wealthy) with the sub-section clearly labelled “the splurge” advertising a utility knife. 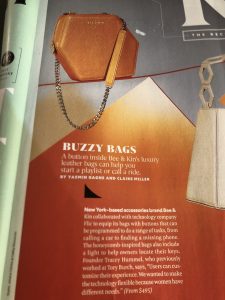 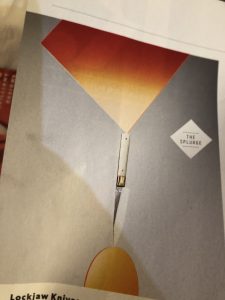 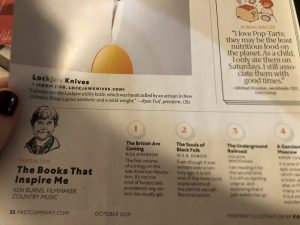 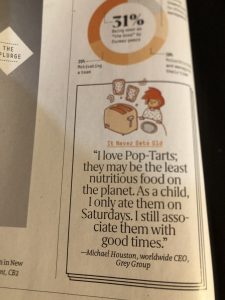 The next section in the magazine is the meat, the features section. The features are dubbed just Features in the table of contents, but this is where longer form stories based on the franchise of the specific issue, live. In this October 2018 issue, which is the “Innovation By Design,” issue, gives us half of the feature section dedicated to “innovation by design” as seen at the top of every page. Even the typography on the opening spread, screams “innovative.” I think one of the reasons Fast Co. is so successful in their franchises is because they come at these stories from a unique angle. For example, the first story in the package is about Adidas and their project Futurecraft Loop is a way for the company to try and recycle its materials and minimize waste. I, for one, have never thought about what happens to my running shoes when I throw them out, but I have thought about what might happen to my technology when its discarded. Fast Co. uses that curiosity that they know we all must have, because we’re all obsessed with our devices. They start out the story, not by introducing Addidas or what they’ve been doing, but with a question to the reader. Though Melissa Chessher hates rhetorical questions I have to say sometimes I think they’re an incredible good attention getter for a lede. Fast Co. starts off by asking “What happens to our devices after we’re done with them?” and then offers a startling statistic that “70% of the world’s discarded electronics are not recycled…” Right there in the first two sentences they’ve given a great lede and nut graf and an entry-point into how the package will center on sustainable design. The package continues, with topics that have never crossed my mind like “A credit card that monitors your carbon footprint” to something I think about every time I order from Amazon, which admittedly is quite often, “A Remedy for Single-Use Packaging.” With simple, self-explanatory, heads, Fast Co. is giving their audience such an easy entry-point for content they know they want to read, and some that they never knew existed. 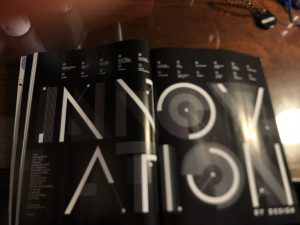 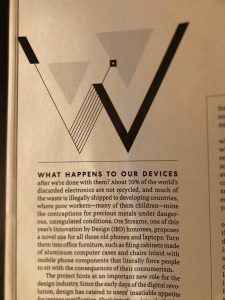 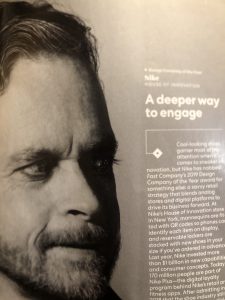 Their last department, albeit a small one, is called Exit Strategy, a clever way of naming the back of the book section and it’s just about as quick and a silly as the name might suggest. In the October 2019 issue, Exit Strategy offers a cartoon of a “BossTicker CEO Bot,” clearly poking fun at a typical Tech company CEO. The abstract at the bottom of the page shows the idea that this CEO bot is an “intelligence augmentation system that transforms any mid-level manager into a commanding C-suite executive.” There’s a cartoon of this CEO bot on the left-hand portion of the page and many of his accessories like his tie, apple watch, an aural implant and more. This section is clearly to get a laugh out of its audience, most of which are higher-level business workers and leaders–so they would probably find this funnier than I do. But, it’s an example also of Fast Co. wanting to leave their audience on a light, uplifting note, which emphasizes the overall positive and progressive tone of the book. 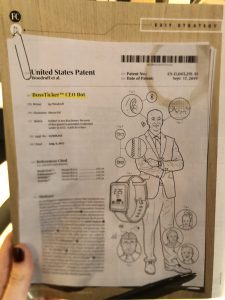 Tone: they know what they’re doing–and they want you to, too.

Voice: they want to show you, inform you, better you, but not talk down to you.