Based on issues of Wired that I have seen, I appears that the colors are not at all consistent. I’ve found that there tends to be a color palette that compliments a large feature within the issue or a major graphic. In addition, the nameplate and cover work all incorporate this color palette. For instance, in the August 2016 Issue of Wired the cover story is about food – therefore, the color palette in this case is black, white and brownish/gold, which is then used for the nameplate. In the December 2016 Issue of Wired, however, the palette is relatively neutral and as a means of spicy up the cover, the nameplate is colored in a vibrant orange. I really like how Wired approaches the colors on the cover, and I think in these two scenarios, the designer’s decision was wise. The orange really pops on the Zuckerberg cover but not in a distracting way because the backdrop is incredibly busy and needs the nameplate to stand out. As for the chicken wing cover, I too love how the designer pulled the color used on the nameplate out of the chicken wing’s palette. In both senses, based on the color choice, the hierarchy was established well where the nameplate did not need to be too large to gain the audience’s attention because the colors do the job for it. 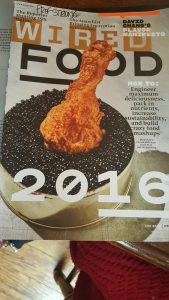 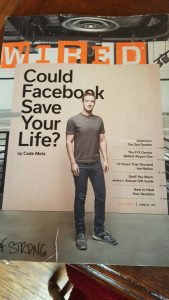 Typically, I have noticed that the color palette throughout Wired’s issues has remained relatively the same for the feature’s content page – usually very dark backdrop with white type. I love this look because it is sleek and unique, which as we know, are some of Wired’s most recognizable characteristics. 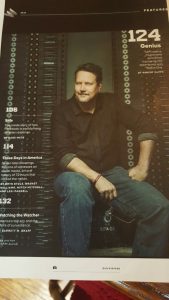 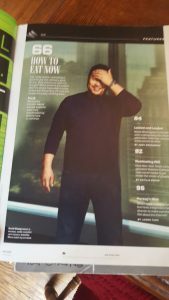 As far as heds and decks go, the colors remain pretty consistent with the hed in either black or white and the deck in the opposite. I think this is a very successful look for the magazine because it provides contrast, which is very appealing, and it also establishes hierarchy. Black and white are two very outstanding colors, and against a busy background or immersed in a spread with a lot of different colors, these two colors really pop out together and remain at the top of the hierarchy. In instances where the backdrop is white, the heds and decks are colored in black and gray. 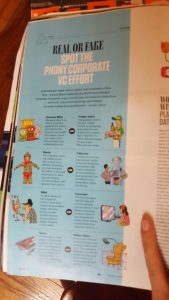 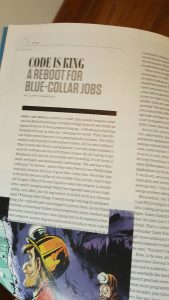 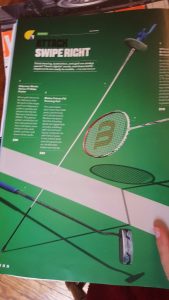 Feature stories have no consistent color palette to them as far as I have seen. Many of them include colors that are used throughout the spread. In other words, the colors are used to compliment the photography, graphic or illustration used. Based on Wired’s longstanding reputation, I think the lack of consistency in the color palette from one issue to another is in part due to how recognizable the magazine is. Being so well-known and respected gives the designers more wiggle room and less of a need for consistency in designing.