The furniture in Wired helps to establish the cohesive design and message behind the magazine. Each element comes together to create a clear picture of what Wired hopes to convey to its readers: a bold, modern magazine that is concerned with the future of technology and its effect on culture. Wired is always forward-looking and I will attempt to define the different “pieces” of furniture in the magazine and how they help to develop this idea.

The table of contents in Wired varies slightly from issue to issue, but is generally always the same style. The design combines geometric shapes and color coding to break up the TOC into distinct sections that correspond with the departments in the magazine. While the colors and shapes change slightly with each issue, this general layout stays the same. This TOC works well for Wired as it’s nonstandard block style feels distinctly modern and almost as if you are looking at some kind of digital organization system like on a smart phone or computer. 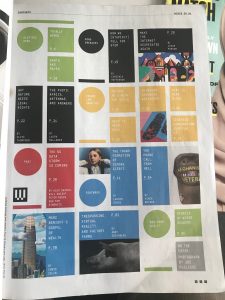 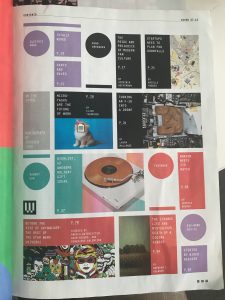 Wired uses sections markers in the top margin of pages. These markers vary in style for different departments (see “Electric Word” vs. “Mind Grenades” but always stay consistent within each section. There is always an  underline that breaks the marker up from the rest of the page. The underline, along with the digital-looking typeface used, make it feel as if each marker is a a website tab that you are cycling through. 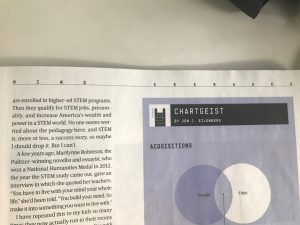 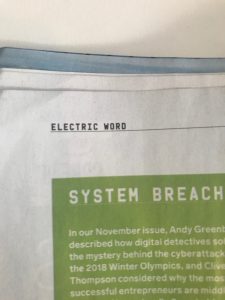 Front cover folio is always formatted as an abbreviated month, followed by the year, then a dash that leads to the name of the issue. It is placed directly under the nameplate. It uses the same typeface as the section markers which creates a feeling of cohesion when navigating through the magazine. 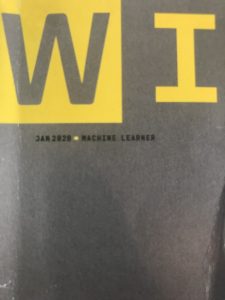 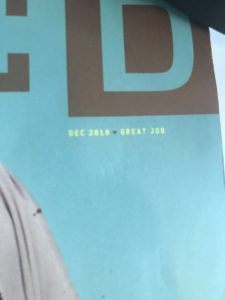 The page numbers in Wired are designed in black boxes with a three digit format (ex: 009 for page 9). This feels like looking at a digital clock or counter which contributes further to Wired’s theme. 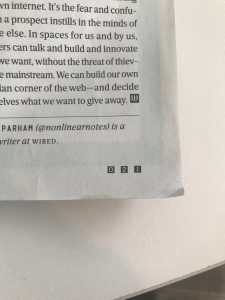 The first department of Wired is formatted the same in each issue. Text is broken up into blocks that are arranged in the same way with each issue. The first page contains a short story in a colored block with a grey block beside it with opinions of contributors. The following page always contains a recap of the previous issue of the magazine in a colored block, and then tweets in grey blocks with a large pull quote at the bottom. This introductory departments works well in introducing the concept of the magazine. The colored blocks of text feel like a blog post or social media feed, which fits well given that some of its content is from social media posts. 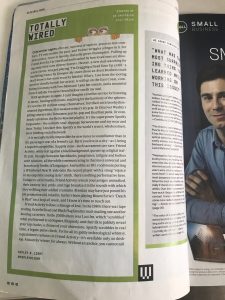 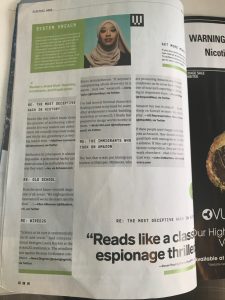 In Wired, there are a few alternate story forms in the “Mind Grenades” department that are styled the same way. Some are infographics or short stories but they are always placed in colored box and use the different logos depending on their content (ex: “Chartgeist” vs. “Angry Nerd”) These alternate story forms are successful in breaking up the content of the rest of the page. 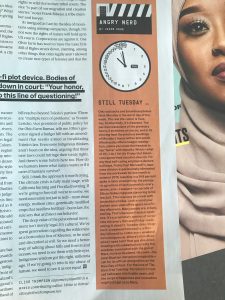 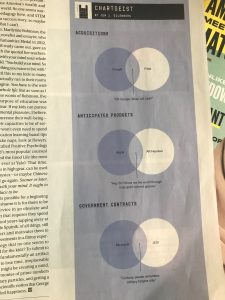 Headlines and pull quotes in the feature well of Wired are unique and always correspond to the overall design of the feature itself. However, they do follow a format in the “Mind Grenades” department. Each headline and pull quote is bolded and and has a thick underline. This helps to differentiate this section from others throughout the magazine. 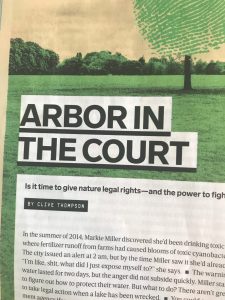 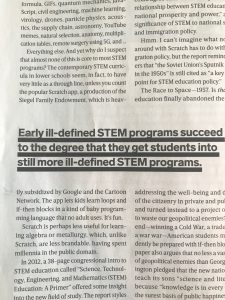 Similar to headlines and pull quotes, bylines do not follow a strict format within the feature well of Wired. However, throughout most of the magazine, bylines are in all caps in white text with a black box surrounding them. The typeface used is the same digital-looking typeface used in section markers. This format makes the bylines appear like clickable buttons that one might find on a webpage. 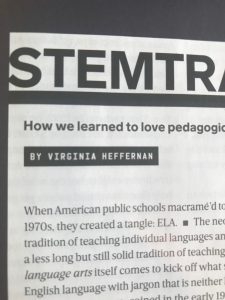 Wired’s use of furniture demonstrates the thoughtfulness behind its design. Each piece doesn’t feel like a decoration, despite how they adorn the magazine, but, rather, feels like a necessary part of the composition that is Wired. Individually, they are all unique visual elements, yet, collectively, they form a cohesive design that drives home the concept behind the magazine.