The function of the front page of Wired is to introduce one of the focused features in the issue as well as to highlight other stories and articles that are included. I took a look at three different issues of Wired: August 2016, December 2016, and January 2017. One thing I noticed when I was analyzing these covers is that the month’s issue is written and then next to it is a catch-phrase. It took me a second to figure out the relevance of the phrase, but I ultimately discovered that it is a phrase relating to the artwork or photo on the cover. 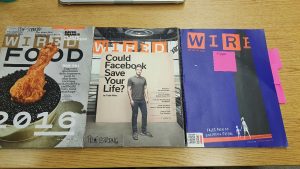 The August 2016 issue has the image of a large chicken wing immersed in caviar because this issue’s main feature is a “how to” on eating and how “everything is good for you and nothing is good for you” nowadays. The catch-phrase next to the month is “dig in.” In addition, the cover mentions numerous inside stories and has them scattered around the top of the page almost hidden by the issue’s nameplate. Although these short story descriptions are higher up on the page, the issue’s hierarchical structure guides your eyes to the chicken wing immediately because it looks as if it is protruding from the page. In addition, the word ‘food’ is written in black and is the largest type on the page and is just below the nameplate. In addition, ‘2016’ is written just as large as ‘food’ but is not as prominent due to the fact that it is white and not black type. 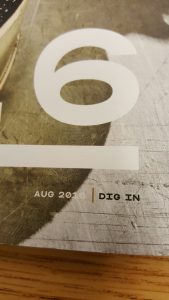 The December 2016 issue has an image of Mark Zuckerberg in the center of the page – full body – with a very techy background. The phrase next to the month on this issue is “check in.”  Although the issue’s nameplate is the largest type on the page, the color is a bright orange that oddly does not draw your eyes directly to it first. The background of the image is very distracting and busy, therefore, your eyes are immediately drawn to Zuckerberg because he is placed in the least crowded portion of the page. Behind him is the title of the story that he is featured in. Interestingly, the cover of this issue is also a fold-out which I find intriguing. However, it unfolds into one large advertisement which is not the most interesting concept. I think it would have been far more worthwhile to utilize that space for a sneak-peak at one of the other features or to expand on the Zuckerberg cover. Additionally, there are five inside stories listed to the right of Zuckerberg within the calmer section of the page with very small type. 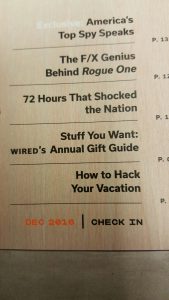 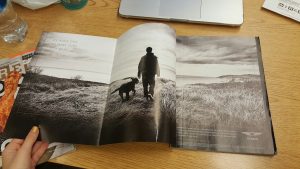 The January 2017 issue, unlike the first two I described, took a different approach – one of simplicity. The cover is an illustration of a mother and child holding hands and walking into what appears to be a black hole to the universe. Given that this is the “sci-fi” issue, this cover sends the perfect visual message. What I love most about this cover is how Wired is not completely written out. Instead, the ‘E’ is halfway through the doorway to the unknown, and the ‘D’ is entirely absent. This issue is also an exception in that it does not have any additional inside stories mentioned on the cover. The phrase next to the month is “Terra Incognita”. 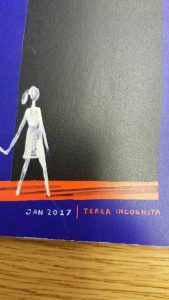 Furthermore, based on the three issues I analyzed, it seems that there is no set format for the cover page – instead, they differ based on what content is being represented. Some have portraiture on the cover, illustrations, strictly type or photographs without people in it. Additionally, the typeface used on the nameplate remains constant across the issues for the most part, with the letters ‘W’, ‘R’ and ‘D’ all having colored boxes around them, but the typeface is differed for the January 2017 sci-fi issue. The typeface used on the January 2017 cover is more playful and less geometric looking than the commonly used one. I think it works well with the illustration because it matches the simplicity of the illustration and almost looks hand-drawn.

The TOC remains pretty consistent in all of the issues. On one page there are only the features listed – usually to the left of the page vertically down in order by page number. The majority of this page is an image of a person that is highlighted in one of the features. For instance, the TOC feature section in the December 2016 issue is an image of John Knoll – one of the main features. On a separate page there is another TOC which outlines other sections in the issue. This section is a modular design that is divided into numerous sections. Many of the sections remain constant across different issues such as the “Alpha” section and the “Ask a Flowchart” section. Other issues have sections such as “File://” and “Gadget Lab.” However, regardless of the sections, this is always a modular design. 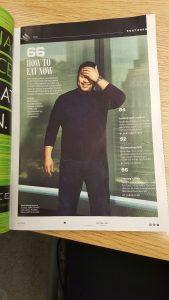 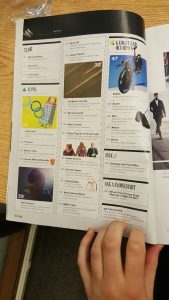 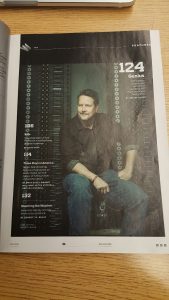 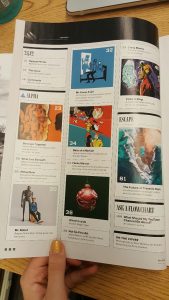 The January 2017 issue, however, does not have the same standard TOC that most of the Wired issues have. Instead, there are three separate pages dedicated to the TOC and they are structured the same way with four modules. 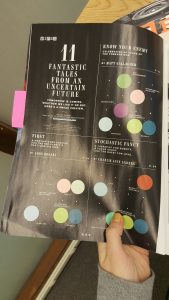 Based on the three issues that I chose to analyze; the number of pages varies quite dramatically. The December 2016 issue has 144 pages whereas the August 2016 has 108 pages and the January 2017 issue only has 92 pages. In addition, I noticed that the spine of the magazine has the nameplate and specific month of the issue as well as “condé nast” written down it – but also has “create. connect.” written before the “condé nast” only for the December 2016 and January 2017 issues – not the August 2016 issue. 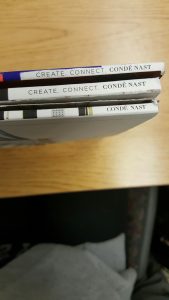 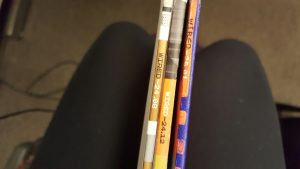 The departments/sections are labeled through an icon – the icon is a single letter in most cases. The letter is the first letter of the word that the section is named. For example, the “Alpha” section is indicated by an icon of the letter ‘a’. These icons are also used on the Wired website. When flipping through the magazine, you can see which section you are in by looking at the top left or right of the page; Here you will find the icon. 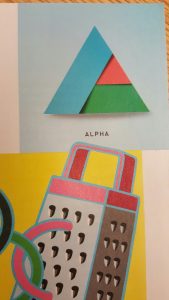 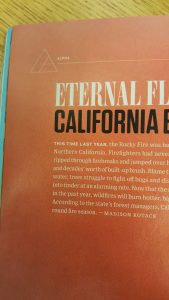 The grid work is quite consistent between issues; Each story sticks more or less to three columns – some, however, go for four columns.

In the folio you can find the page number and any artistic credits (i.e. photographers, illustrators). The numbers are small and use the same typeface as the nameplate. I think Wired does an excellent job with organization as a whole, however I have noticed that not all pages are numbered, and it is a bit difficult to navigate directly to one page instantly. I do like how they present the artistic credits because it is very simple and quite unique compared to any other publication I have seen. For a photographer, they simply place his or her name in the center of the folio with the icon of a camera to the left of it. For an illustration, the same concept is used however the icon is a paint palette. Interestingly, some folios have even more information such as footnotes. 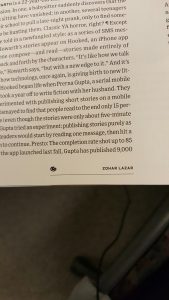 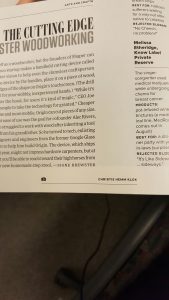